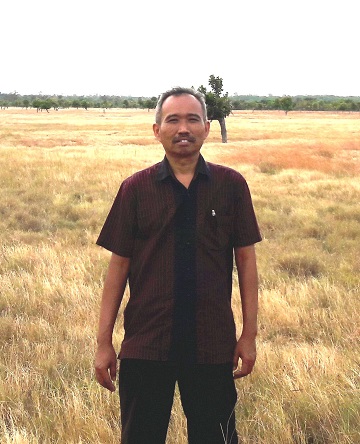 Challenges in the world of agriculture to meet food needs are getting bigger due to increasing problems of pests, diseases and abiotic stresses such as drought, flooding, saline land, acid rain, and extreme temperatures. The explosion of pests and diseases causes losses such as decreased production and decreased farmers' income.

“For example, in the case of blast disease, the losses during 2011-2019 amounted to 446 billion rupiah per year. Meanwhile, planthopper attacks cause losses of 1.32 trillion rupiah per year. Furthermore, this can lead to a decrease in the degree of food security and an increase in the threat of food insecurity," said Prof Suryo Wiyono, Professor of the Faculty of Agriculture, IPB University in the Press Conference of the Professor's Pre-Scientific Oration, (15/9).

According to Prof. Suryo Wiyono, one of the efforts that can be chosen to reduce the risk and threat of pest and disease explosion is to use microbes. Utilization of these microbes can be done directly and their derivatives in the form of genes or chemical compounds produced. The use of these microbes is known as bioprospection.

"The use of microbes is increasingly widespread and important because they are not only able to control pests and diseases, but also provide nutrients and assist plants in overcoming abiotic stresses such as salinity, high temperature and drought," said Suryo.

In his presentation, Prof Suryo Wiyono also stated that the use of microbes can reduce the use of pesticides and even in some cases can replace pesticides completely. For example, the combination application of Trichoderma, Plant Growth Promoting Rhizobacteria (PGPR), yeast Rhodotorula minuta and Lecanicillium in an intensive microbial technology package is able to replace 100 percent of the use of synthetic chemical pesticides on chili plants.

“The low use of pesticides can of course have a positive impact on the environment and also on health. It even reduces the risk of a wider pest and disease explosion,” he said.

In addition, he added, the use of microbes can also reduce the dose of synthetic fertilizers by increasing the availability of soil nutrients, the efficiency of nutrient absorption by plants and reducing nutrient loss.

He added, to answer the existing challenges, microbial bioprospecting is a fundamental component in developing modern, high-production, adaptive and sustainable agriculture by relying on the utilization of national biological resources.

“The threat of a food crisis must be answered and started by strengthening production. The use of microbes in the protection and production of plants is one of the important ways. From the many experiments that have been carried out, this problem of pests, diseases and abiotic stress can be answered with microbial technology,” he said.

According to him, we must fight for food security, independence and sovereignty. Utilization of national biological resources in the form of microbes is one way to make it happen. "It is time for us to increase agricultural production in a more environmentally friendly and sustainable manner, no longer depending on chemical inputs, which are mostly imported," he concluded. (Zul)