Professor of IPB University: Mathematics Can Prevent the Spread of Infectious Diseases 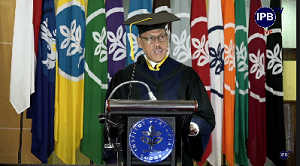 Professor of IPB University from the Faculty of Mathematics and Natural Sciences (FMIPA) said that mathematics can be used to prevent the spread of infectious diseases. In the Press Conference of the Pre-Oration of Permanent Professors, (16/12), Prof. Jaharuddin said that the mathematical studies carried out were related to the dynamic properties of the mathematical model of the spread of infectious diseases.

“The number indicating the spread of the disease, which is the basic reproduction number, is formulated to prevent disease outbreaks or eliminate infectious compartments in the population. The fixed point stability theorem that is formulated can provide information when the spread of measles disappears (disease free) and becomes an epidemic (endemic)," he explained.

On the spread of measles, he continued, the compartment model was developed based on the fact that vaccination and treatment are strategies in managing and mitigating the spread of the disease.

“The basic reproduction number obtained only depends on the model parameter values, it is necessary to know the most sensitive parameter. This sensitivity index provides information about the physical parameters of the model that need to be controlled so that the spread of this disease does not become an epidemic," he added.

He continued, based on a sensitivity analysis with data on the spread of measles in Indonesia in 2018, it is recommended to minimize contact and increase treatment in exposed individuals.

In addition to preventing the spread of disease, mathematical models can also be used to predict the value of wave parameters. The predictions generated from these parameters become the basis for anticipating the risks that may arise as a result of this phenomenon.

“Internal waves are waves that occur below the surface of the sea, so they are not observed with the naked eye. The existence of these internal waves is caused by differences in the density of seawater in each layer. Internal solitary waves are one of the internal waves that are widely observed, because these waves are detected through regular dark and bright patterns on the sea surface that can be recorded by SAR (Synthetic Aperture Radar)," he explained.

According to him, internal waves cause cold water and plankton or other nutrients near the seabed to move to the top layer near the surface.

"However, the challenge of this mathematical modeling arises when the model is tested for suitability with the known data in the problem," he said. (Zul) (IAAS/RDL)