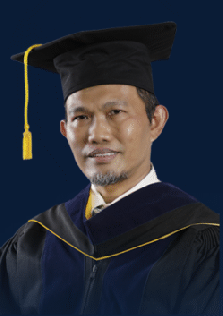 Professor Alimudin, IPB University lecturer from the Department of Aquaculture, Faculty of Fisheries and Marine Sciences, is trying to use genetic engineering to increase aquaculture production. To date, he has successfully utilized genetic engineering for several cultured fish. These fish include carp, catfish, gourami, and betta and shrimp.

"DNA marker-based selection, transgenesis, and genome editing have the potential to be used as modern breeding methods that are faster and more precise," said Prof Alimudin.

Furthermore, the IPB University lecturer explained that DNA marker-based selection was carried out by selecting fish based on superior DNA ownership. Thus, the chances of finding superior variations and the chances of inheritance of traits will be higher and more predictable. Not only that, in this method, the number of generations and the time required will also be much reduced compared to conventional selection.

Prof. Alimudin admitted, the DNA-based selection results that have been released so far are only goldfish varieties with a focus on resistance to viruses and bacteria. The goldfish is the Disease Resistant Majalaya goldfish (STOP goldfish) which was released in 2015. Not only that, other goldfish are the MUSTIKA, MARWANA and JAYASAKTI carp which were released in 2016.

All varieties of goldfish, said Prof. Alimudin, are superior broodstock that grow faster and are more resistant to viral infections. He admitted, this variety has been widely used by the community, from Aceh to Papua with a total parental distribution of almost 200 thousand individuals in 2020.

Prof Alimudin explained, to make fish that are resistant to viruses and bacteria, he and his colleagues developed a DNA-based selection protocol called Protocol 1. This protocol uses the Major Histocompatibility Complex (MHC) gene allele as a marker specifically designed so that disease-resistant goldfish can be identified. with just a simple PCR process. This method was awarded as the 104th most prospective Indonesian Innovation award in 2012.

“The selection of DNA markers for other commodities is still in prototype form. In catfish, we are currently conducting DNA marker selection to produce varieties that are resistant to bacterial infection, stress, and grow fast,” added Prof. Alimudin, an expert in fish genetic engineering from IPB University.

In addition to carp and catfish, Prof. Alimudin has also conducted DNA selection on gouramy. He explained that the selection of fast-growing gouramy based on DNA markers was initiated in 2020 and succeeded in distinguishing four variants of gouramy based on their growth potential.

"The results of the interim analysis show that only selecting superior gouramy broodstock based on DNA markers will result in a fish population with a body weight of twice as high," said Prof Alimudin.

Currently, Prof. Alimudin and colleagues are also carrying out the latest breeding through genome editing technology to produce superior shrimp brooders. "With genome editing technology, shrimp genes can be modified without inserting foreign genes from outside, so that the shrimp or fish produced are not categorized as transgenic products," said Prof. Alimudin, an aquaculture biotechnology expert from IPB University.

Prof. Alimudin explained, with DNA selection technology, transgenesis and genome editing, transgenic fish products can be produced that are faster to grow, resistant to disease and stress and have high nutrition. Thus, it can increase crop productivity, reduce maintenance costs, and improve the quality of fishery products.

"Clinically, this transgenic fish product does not cause side effects, because the products are made to fulfill the body's nutrition," said Prof Alimudin.

Regarding this development, Prof. Alimudin emphasized that the breeding process must be carried out continuously. The reason is, if it is not continued, the prospective broodstock that has been prepared for breeding will be abandoned. This will have an impact on breeding activities that will be carried out in the future.

“Without the continuous availability of superior broodstock and seeds, the high production figures will be temporary. When genetic quality declines, production will gradually decline until it is difficult to increase again," concluded Prof Alimudin. (RA) (IAAS/SYA)