Dr. Omo Rusdiana: The Importance of Integration and Synchronization of Flood Mitigation in South Kalimantan 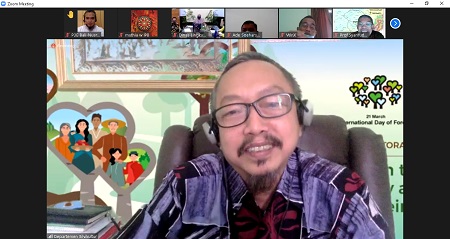 Behind the area of forest cover that still fairly adequate, several territories in Kalimantan especially South Kalimantan (Kalsel) still having floods. So it is necessary to have a study about the carrying capacity inventory in case of natural disaster mitigation and spatial management in Kalimantan.

Following up on this, Dr. Omo Rusdiana, Head of Silviculture Department, Faculty of Forestry IPB University also giving feedbacks. Hopefully, this response can illustrate the integration and synchronization steps needed in environmental and forestry development plans in flood mitigation efforts.

He mentioned that floods in early 2021 in this area related to the use of land near the watershed (DAS) in Barito.

“Flood disaster can not be separated from the management carried out by other areas in the watershed. If there is a damage in Kalsel, it can be a contribution from other areas so the cooperation between territories become important because the scope is not only based on administrative areas but also regionally,” he said at the Discussion and Socialization of Flood Mitigation Efforts in Kalimantan area that hosted by Ecoregion Development Control Center (P3E) Kalimantan, 1/4.

Based on data and facts from many sources, the Kalimantan climate condition in January 2021 tends to be extreme. It can be said to an extreme rain because its intensity is 461 mm for 5 or 8 to 9 times from normal rainfall. So with the condition of the remaining forest cover, it is unable to control flooding during extreme rainfall.

Other than that, the ability of water bodies to accommodate the rainfall relatively low and steep topographical conditions also triggers the flow of water surface to be faster. Based on the administrative area, forest area proportion in Kalsel only 18,2 percent because most of it has been exploited to be dry agricultural land, farm, and mining. The utilization of these must also consider the carrying capacity based on land capability. Several territories are not suitable for intensive use patterns, others are more suitable for protection and ecosystem services, especially in production forests. So it is needed a strategy and analysis of policy and implementation.

The utilization of forest land that is not suitable with the carrying capacity has the potential to destruct and aggravate the impact of the flood. One of the impacts is the occurrence of critical land, which can contribute to water management. He gave the idea that there should be a more intensive study about the policy aspects of the issue of forest area allocation and land capability.

“The result of developments, if they did not pay attention to the environment, will correct the result of the development itself. So our aim to improve people’s welfare and better environmental conditions will be hampered,” he added.

Related to the strategic issues, one of them is the handling of floods, and Forest and Land Fire (Karhutla) is also considered not optimal. There need to be integration and synchronization based on these strategic issues and combined with strategic policies that are related to the existing issues. The approach can be done through a jurisdiction-based and landscape-based approach. (MW/Zul)