Dr Feryanto Gave An Explanation About The Soaring Price of Chili 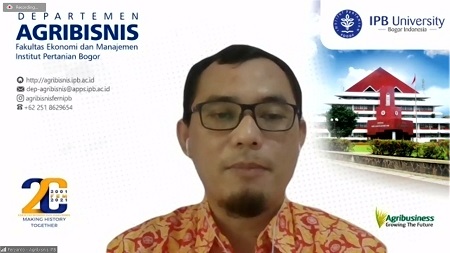 Dr. Feryanto, a lecturer at IPB University from the Department of Agribusiness, Faculty of Economics and Management (FEM), also shared his views regarding the soaring price of chili in Indonesia. He said, soaring chili prices could not be separated from the supply and the demand for chili.

"Chili is a bit unique because it is a major component of cooking spices in the community. And interestingly, our people are more happy and tend to consume fresh chilies, that's where the price of chili is very volatile," said Dr. Feryanto.

From the demand side, said Dr. Feryanto, demand for chili tends to be stable. He said, the demand for chili in one month was in the range of 250-260 thousand tons. "Almost every month the consumption is like that, but indeed in certain months such as before the fasting month and religious holidays, the demand increases to 15 percent," he explained.

Meanwhile, from the supply side, he judged that there is an unstable production problem. In fact, at the end of last year, chili production tended to decline.

For the chili commodity, Dr. Feryanto explained that the production at the end of 2020 began to decline. This phenomenon is worsened by the withdrawal of chili planting season due to high rainfall. In fact, in some chili production centers such as Central Java and East Java, chili agricultural land was flooded so that as much as 40 percent of the land are having crop failure. Thus, the upward trend in chili nutrients has been seen since the end of 2020.

Dr. Feryanto also said that the supply chain for chili commodities also contributed to the increase in chili prices. This is because there are still many obstacles in the chili production center areas, such as limited transportation and post-harvest handling systems that are not yet optimal.

"The current post-harvest handling of chili has not been able to minimize the yield loss, which is still very high. From here, the seller raised the price of chilies because the price depreciation was very high,” added Dr. Feryanto.

He also suggested that the Ministry of Agriculture can cooperate with the Meteorology, Climatology and Geophysics Agency (BMKG) in mapping the weather in the future. This collaboration is intended to reduce crop failure due to bad weather.

In addition, Dr Feryanto also emphasized the importance of good post-harvest management. "There are those who propose a warehouse receipt system, but this system is also not suitable for the chili commodities because these chilies do not last long. If it is cool storage, it requires a large investment,” he added.

Regarding to the supply chain, Dr. Feryanto also suggested to do a better management, starting from storage, transportation and processing. Not only that, he also suggested that there should be incentives for farmers who plant chili. This is because the capital to plant chili is also quite expensive. With this effort, it is hoped that the chili production can be maintained and there is no deficit. (RA) (IAAS/YES)