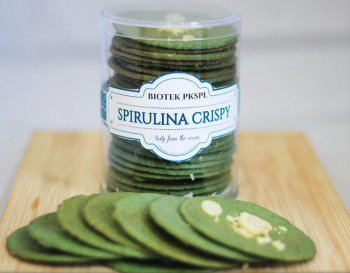 Spirulina is a micro-sized algae or marine algae (microalgae). Spirulina is already known as a superfood from the sea because of its nutritional content. There are many spirulina-based supplement products that we can find on the market. Generally, this supplement is consumed by certain people as a health supplement.

The potential of spirulina which is rich in nutrients and bioactive compounds which is good for health needs to be utilized more. Not only as a complement food, but also as food and beverage products, so that more people consume them. Since 2013 the Center for Coastal and Marine Resources Studies (CCMRS), the Institute for Research and Community Service of IPB University have started to develop spirulina-based products. "Spirulina crispy is the first product to be developed, then a roll cake and spirulina latte," said Dr. Kustiariyah Tarman, one of the IPB University researchers who is concerned with the development of spirulina products.

The researcher from CCMRS said that spirulina is one of the microalgae that can be cultivated. One of the research institutes under the Ministry of Marine Affairs and Fisheries, namely the Center for Brackish Water Cultivation Fisheries, Jepara has researched and carried out engineering of spirulina cultivation. In addition, several universities, including IPB University, also conduct research on spirulina cultivation.

"The research results of these research institutions have been scaled up. In several areas, spirulina has been cultivated on a large scale, one of which is by a company located in Sukoharjo, Central Java. Currently, crispy spirulina has been produced for commercial consumers. This product can be obtained at several souvenir outlets in the city of Bogor. Apart from that crispy spirulina is also available at Botani Mart, IPB University, "he said.

In developing the commercialization of crispy spirulina products, CCMRS IPB University received funding support from the Ministry of Research, Technology and Higher Education. Spirulina crispy is one of the superior products of CCMRS IPB University as one of the Higher Education Science and Technology Excellence Centers. This crispy spirulina was commercialized after obtaining a home industry product permit (P-IRT) from the Bogor City Health Office.

Besides crispy spirulina, CCMRS develops other spirulina-based products, namely roll cakes and lattes. Spirulina used in crispy products, roll cakes and lattes can increase the nutritional content and bioactive components that are good for health. Among them are protein, minerals and pigments, especially phycocyanin which can function as antioxidants. In addition to food and beverage products, CCMRS collaborates with the Department of Aquatic Products Technology, the Faculty of Fisheries and Marine Sciences to also develop cosmetic products, including spirulina masks.

From this innovation, Dr. Kustiariyah hopes that spirulina crispy and other spirulina products will be widely known by the public, given the many benefits of spirulina. The commercialization of spirulina-based food products is also one way to introduce spirulina to the wider community. In this effort, CCMRS IPB University also introduced spirulina by attaching a photo and a brief description of Spirulina on the secondary packaging (outer packaging) of crispy spirulina. With the recognition of spirulina and its benefits by the community, it is hoped that spirulina consumption will increase so that it can contribute to improving the quality of life of the community. (IAAS/FAP)