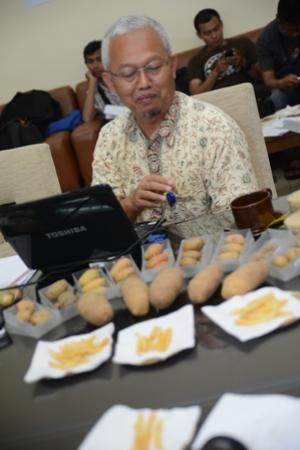 Professor of Faculty of Mathematics and Natural Sciences, Bogor Agricultural University (FMIPA IPB), Prof Dr Ir Suharsono, DEA, would conduct the Scientific Oration on Saturday (28/2), with the title of “Modifikasi Genetik Tanaman untuk Meningkatkan Produksi Pertanian / Genetic Modification of Plants to Increase the Agricultural Production”. In the press conference held in Campus of IPB Baranangsiang, Thursday (26/2), Prof. Soni, as usual he called, explained the research done for 14 years, i.e. about the excellent soybean and potato varieties.

Prof. Soni hoped, with the excellent soybean and potato varieties found, they could become the valuable inheritance for the people of Indonesia. “Elephant dies leaving the ivory, a breeder dies leaving the yielding varieties,” he said in front of the members of media.

It was said, the genetic modification both intentionally and unintentionally had been done since long ago by our ancestors for producing the varieties in accordance with the wishes. Some ways to do the genetic modification had been done starting from the conventional crosses upto the more modern ways, like through the technology of DNA recombinant to produce a variety.

“IPB has the responsibility to produce the excellent varieties which are the essential capital in increasing the agricultural production. Some lines of soybeans and potatoes are having a huge potential to increase the agricultural production in Indonesia. Support from the government is essential for the release of the varieties, so that the farmer can enjoy the fruits of the academics,” he said.

Through the conventional way, Prof Soni and his team had assembled some lines of potatoes and soybeans with high yielding and large seed with bright yellow seed coat color. These lines were very potential to increase the soybean production in Indonesia.

Imports of soybean seeds for the Indonesian food were only an average of about 1.2 million tons per year, not including the soybean imports for feed. To overcome soybean imports, the national production for soybean should be increased.

“To get the cultivars with high production, tolerant of sour land and large seed, we have mated the soybean cultivar of Slamet which is tolerant of sour land and with high production and the cultivar of Nokonsawon having large seed, bright yellow seed coat but with low production. This crosses produce 18 promising lines called KH, the abbreviation of promising cultivars having the high production potential, large seed and brigh yellow seed coat color. These promising lines are ready to release, but again we need the fund support to be able to be released as the national excellent cultivar, because it still needs the stage of multilocation trials,” he said.

Through the positive selection and followed by the yield trials and the truth trials of the candidate of cultivars, Research Center for Genetic Resources and Biotechnology (PPSHB), Institute for Research and Community Services (LPPM) IPB in collaboration with PT Amanah Prima Indonesia-Jakarta and CV BA Farm-Bandung had developed the potato cultivars for french fries i.e. Jala Ipam.

“It is named Jala because the skin is net-shaped, and Ipam because it is developed by IPB and PT. Amanah. This cultivar has been registered in Ministry of Agriculture based on the Decree of Minister of Agriculture dated 21 April 2014,” he said.

Jala Ipam cultivars had the skin with net, white tuber flesh with the high starch content. Large sized tubers and kidney-shaped so it was suitable for use as a raw material for the making of french fries.

“Development of Jala Ipam potatoes from the laboratory to the consumer and ready to eat (from the lab to the table) involves four parties which work synergistically i.e. the academics as the provider of healthy plant seeds, the seed breeder that produces the seeds of plants in vitro into seed tubers, the plasma farmers who produce the potato tubers in the ground, and the industry that processes and markets the end product,” he explained.

“In addition to Jala Ipam, we have very much collection of accessions, lines, cultivars or clones of potatoes. This potato germplasm is very important for the formation of new cultivar. Now, some clones have produced the tuber of Go to be used as the material for multilocation trials for releasing the excellent potato cultivars, both for the vegetable potato, the potato for chips, and the potato for french fries,” said Prof Soni .

Jala Ipam was one commodity to be developed to become the industry of french fries which was fully done by the people of Indonesia starting from the provision of cultivars, the seed supply, the production of tubers upto the processing and the marketing.(zul)