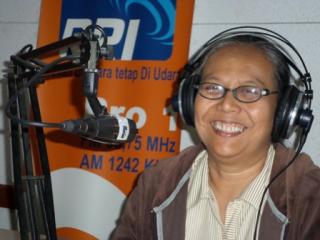 Kedasi birds in English Plaintive Cuckoo (Cacomantis merulinus) is a generally a very vocal species. The Plaintive Cuckoo’s calls are usually heard in the morning and the evening, and the male's songs are described as a mournful, as it is high-pitched four note whistle. Kedasi is the name given to a group of birds of Kangkok or Cuculidae. Alternative  name given to this group is Wiwik kelabu or Uncuing, or Sirit Uncuing. Howeover, ecologically this bird is important species for farmers, as it helps to control insect pests.

Most Kedasih species are insectivorous, as insects are their primary diet, and even  hairy caterpillars. Thus kedasi birds can be friend of farmers, i.e. in the case of insect pest eaters.

This was presented by the ornithologist of Faculty of Forestry, Bogor Agricultural University (FAHUTAN IPB), Dr. Yeni Aryani Mulyani, in the Dialogue at RRI Bogor on 93.7 FM frequency.

It is said, usually the birds are detected from its  loud voice, but rarely seen, so it is not easy to learn the types of these birds. This species lays its eggs into the nests of other birds, named hosts. These birds become the foster parents of the young cuckoo. But the hosts often mob the cuckoos and drive them away from the nest-site. Thus, it is a brood parasite or   or nest parasitism.

As is generally the parasites, the birds Kedasi or Mandy to get food from the host, while the host will suffer due to parasitism by Kedasi or Mandy's. As numerous cuckoos, the Plaintive Cuckoo is a brood parasite. It favours the closed nests with narrow entrance, built by small passerines such as Cipoh kacat, remetuk the sea, kipasan discolorations, and type of perenjak and cinenen. This is a fairly small cuckoo.

Kedasi will deposit its eggs in in the domed nest other birds. Usually, the female cuckoo watches the future hosts from a concealed perch. She even visits the nest when the owners are away feeding, and lays her egg into this nest. The laying occurs before the beginning of the incubation. Then, the female cuckoo flies away from the host nest, often with an egg in the bill, and she consumes it later. Remarkably, Kedasi eggs generally hatch earlier than the host’eggs.  Once hatched, the chick cuckoo often pushes the other eggs or chicks from the nest. The foster parents give all the parental care to the cuckoo, and the young grows rapidly, fed with the food normally delivered to a complete brood.

Based on its breeding behaviour, it seems that Kedasi is  cruel and dangerous bird because it threatens the sustainability of other birds. Is it true? Kedasi bird behavior is considered parasite bird to other animals as it is the impact of the environmental degradation, it lost it habitats he said. (Wied).