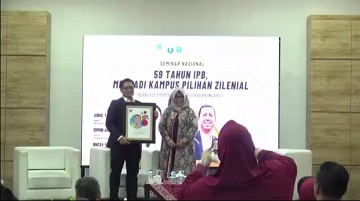 Branding a brand has great power in targeting its market, including universities. As a university, IPB University must have a good reputation in the eyes of society and the millennial generation as the best campus in Indonesia and Asia.

This was revealed in the National Seminar "59 Years of IPB, Becoming a Millennial Campus of Choice" which was held by the Vocational School of IPB University together with the Alumni Association (HA) of IPB University. The activity was held in a hybrid manner, (06/12).

Walneg S Jas, Chairperson of the HA IPB University Central Leadership Council (DPP) said this activity was not only a form of dedication and HA's role in advancing IPB University. However, he said, this activity was a strategic step to attract the interest of the millennial generation to join the alma mater of IPB University, especially in the midst of campus competition and digital certificate training.

"IPB University has no doubt about its branding in terms of the existing generation and the institutional segment. We hope IPB University is not interpreted by the younger generation as an agricultural campus in the narrow sense, but agriculture in all its developments," he said.

This activity presented alumni of IPB University who have become high-ranking companies and marketing communications institutions as well as professionals in the field of marketing and branding, one of whom is Ainul Yaqin, General Manager Personal Care of PT Unilever Indonesia Tbk. On that occasion, he explained how to build a strong reputation in each generation.

"A strong reputation can be built when a brand has a purpose, has its own differences or uniqueness, and has salience (importance) in terms of the availability of body and soul," he explained.

In marketing science, he continued, there is logic and magic, namely the physical form of the products and ideas being sold. With this, consumers not only buy product functionality, but also emotional satisfaction.

Meanwhile, Simon Jonatan, Director of PT Swara Gangsing gave a successful strategy for launching new products and start-up companies. According to him, the key to the success of the launch also depends on the company's leaders. The market leader must be led by someone who is unyielding and thinks out of the box.

"The key to success in launching a product includes knowing the target market, the type of business you are involved in, the category, the right execution, being able to compete with competitors and a strong will," he explained.

Rhesa Yogaswara, Chairperson of the Indonesian Marketing Research Association who was also present explained how to become a market leader, including how to brand a university. He said, market leaders must know their war area and be able to offer something new or niche.

"Research results reveal that in comparing campuses to the target market it is not enough just to aim at one target, the decision to enter a campus is also influenced by the choices of parents and those closest to them," he explained.

Therefore, according to him, the campus must be able to create a good image, not only for the millennial generation. Generation X as a smooth influencer also has a stake in the decisions of the zileni generation, in addition to close friends being the strongest influencers. (MW/Rz)