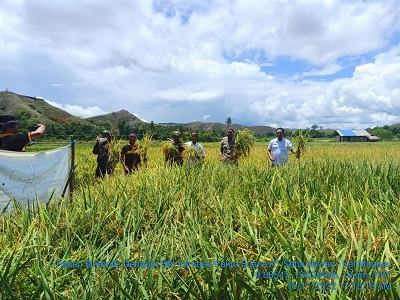 IPB University lecturers and Gadjah Mada University (UGM) are testing the System of Rice Intensification (SRI) rice cultivation in Mauliru, Kambera District, East Sumba. The trials focused on increasing irrigation production and efficiency by implementing an IoT (internet of things) based environmental monitoring system.
They are Dr Chusnul Arif from the Department of Civil and Environmental Engineering, Faculty of Agricultural Technology IPB University and Dr Bayu Dwi Apri Nugroho, lecturer from the Department of Agricultural and Biosystem Engineering, UGM. Planting practices were carried out on 16 August 2022 and harvested on 16 November 2022. In the cultivation process, farmers were assisted by the UGM research team, Umi Hapsari and Badi'atun Nihayah, especially in managing irrigation water. The yields show a very significant increase in production.

"From the trial results, we did not expect to produce a very high production. Hopefully it can be replicated by other farmers, of course with the support of the local government," added Dr Chusnul Arif.
He explained that SRI cultivation saves more seeds and water. The key is in the soil aeration system. With intermittent irrigation, soil aeration can be increased so that sufficient oxygen is available in the root zone.

"East Sumba is known as an area with limited water resources, so irrigation water needs to be used more effectively and efficiently," he added.

According to Hanis Hina Konda Namu, Chair of the Setia Kawan Farmers Group, with the SRI system production was obtained 10.72 tonnes per hectare, jajar legowo 2-1 of 9.97 tonnes per hectare and conventional 9.94 tonnes per hectare. "This result is the biggest result so far we have been cultivating rice," she said.

The same thing was also conveyed by agricultural extension officers, Muslihin. "For decades accompanying farmers, this is the biggest production result," he added. At this harvest, the Head of the Water Resources Division, Public Works and Public Housing (PUPR) Office of East Sumba Regency, Umbu Raing, was also present. “The results obtained with SRI are amazing, this system must be replicated elsewhere. The head of the farmer group here will become a pioneer to share knowledge with other farmers," said Umbu Raing.

In a separate place, the results of this trial were also conveyed to the Head of the Agriculture and Food Service, East Sumba Regency, Nico Pandarangga. “These results need to be recorded and replicated elsewhere. We thank you for the support and assistance provided by the best universities in Indonesia," he said. (CHA/Zul)