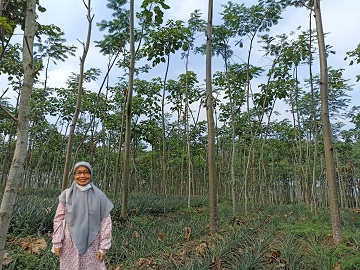 Professor of IPB University, Prof. Noor Farikhah Haneda reminded the importance of the role of insects in the forest.  She explained that insects have a food chain attachment relationship to individual trees in the forest.  These insects function as an index of changes in certain parameters such as oxygen content, pH, salinity, soil moisture content, soil compaction, and concentrations of contaminants accumulated in the tissue as well as changes in the wider environment.

She continued, parasitoid and predatory insects are insects that have an important role in biological pest control that is safe for the environment.  Not only that, pollinating insects in crop pollination and the silk industry can provide an astonishing income.

This lecturer of the Silviculture Department of IPB University explained that natural changes from natural forests to industrial plantation forests had an impact on the loss of biodiversity and led to pest problems.  She explained, the presence of abundant hosts as a result of planting monoculture species causes pests to have abundant food sources.

“There have been many cases of pest attacks in several forests that are managed in a monoculture.  For example, Hyblaea puera attacks caused serious damage to teak stands in Java," said the Deputy Dean for Academic and Student Affairs, Faculty of Forestry and Environment, IPB University.

She also gave an example, Neotermes tectonae species that attack teak trunks and branches can cause significant economic losses. Moreover, mahogany stands were also attacked by the Hypsipyla robusta shoot borer.  The same thing also happened to sengon plants.  The plant was attacked by the sengon stem borer Xystrocera festiva which was able to cause death in sengon stands.

"Pest attacks are still a crucial problem in any forest exploitation," he said.

"A series of studies have been carried out to obtain superior sengon clones that are resistant to boktor pests.  Resistant sengon plants have a higher average value of initial plant growth than susceptible sengon plants," she said.

She explained, the results of this study provide new hope, that the use of plant species that are resistant to pest attacks can continue to be developed for other types.  The engineering of sengon clones resistant to boktor pests has been awarded the 104 Most Prospective Innovative 2012 award.