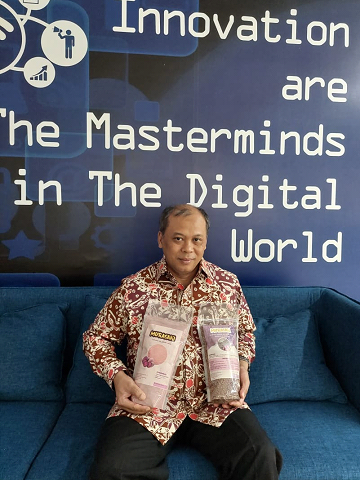 He explained that the functional ingredient industry processes food sources at various levels of technology by involving several stages of the process. These processes range from simple to complex, both physical, chemical and biochemical, enzymatic, and/or involving the activity of microorganisms.

This lecturer from the Department of Food Science and Technology explained that ingredients in the food processing process function to improve physical and sensory qualities, extend shelf life, and can provide functional effects on health.

Regarding the development of the functional ingredient industry, Prof. Feri Kusnandar gave some suggestions. These suggestions include focusing on the utilization and development of local food sources that are widely available or have prospects for widespread cultivation as industrial raw materials, such as cassava, sweet potato, sago, sorghum, corn, oil palm, coconut, sea fish, seaweed, porang.

The Deputy Dean for Academic and Student Affairs at Fateta IPB University also suggested strengthening basic research, process technology and applied technology at various levels of technology, from research on a laboratory scale to scale up. These efforts are made so that the resulting innovation can be ready for adoption on a commercial scale.

"We also need to strengthen the food science and technology education curriculum with ingredient technology content," he said.

Prof. Feri also suggested strengthening human resources through multidisciplinary education at the postgraduate level who are able to conduct research and apply science and engineering as well as technology, process engineering, development of processing machines to produce ingredients, as well as business feasibility studies. He said that strong government policy support is needed in the development of the functional ingredient industry, both for innovators and business actors.

"The development of a functional ingredient industry with high added value and competitiveness must be promoted," said Prof. Feri.

"This is in line with the expectations conveyed by the Vice President of the Republic of Indonesia at the International Halal Congress in 2022, which is to make Indonesia a World Halal Producer Center," he concluded. (*) (IAAS/FJN)