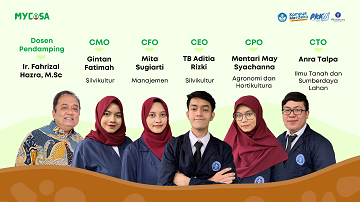 Through the Student Creativity Program (PKM), Gintan Fatimah, Mita Sugiarti, TB Aditia Rizki, Mentari May Syachanna and Anra Talpa made organic mulch named Mycosa.
According to Anra, mulch is agricultural material that covers cultivated plants which is intended to maintain soil moisture and suppress the growth of weeds and diseases. Mulch can also protect the soil from erosion so that the structure and composition of the soil can be maintained.

“The use of mulch in agriculture has been a trend for a long time, many farmers in Indonesia have used mulch to increase their agricultural productivity. There are two types of mulch known in the agricultural world, namely organic mulch and plastic mulch," he said.

Under the guidance of Ir Fahrizal Hazra, MSc, Anra and the team then developed Mycosa. According to Anra, the world's first biomulch has three main advantages. It is made from abundant organic material, can increase the efficiency of nutrient uptake and can be decomposed in one cycle of horticultural harvests.

“Mycosa is a biomulch product made from materials that are abundant in Indonesia, namely corn husks and used paper. Based on the research, corn husk is an organic waste that is good to be used as mulch film. Waste paper also has a good ability to maintain soil moisture. In addition, the use of corn husks and used paper for Mycosa can be a solution to the problem of husk and paper waste in Indonesia," he said.

Since July 2022, he said, Mycosa has been mass-produced with a production location in Bogor, West Java. There are two types of Mycosa that have been produced, namely Mycosa pot variant and Mycosa mound variant. Mycosa can also be purchased in various marketplaces in Indonesia such as Shopee, Tokopedia, and Whatsapp.

"Further information about mycosa can be seen on the official Instagram account of Mycosa, namely Instagram.com/mycosa.id and the official Facebook account at Mycosa Biomulsa. Let's fertilize all of our plants by using Mycosa," he concluded. (**/Zul) IAAS/ELS