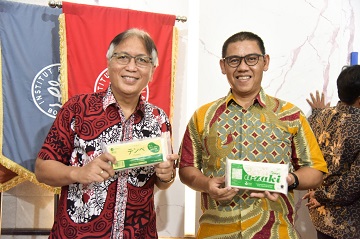 Tempe is the only processed soybean product that is native to the Indonesian cultural heritage. Meanwhile, tofu, soy sauce, tauco, and others are foreign cultures adopted by the community. Based on Serat Centhini, tempeh culture has been known since 400 years ago. The word "Tempe" first appears in Serat Centhini which describes the life of Javanese society in the 16th century. In Serat Centhini written several types of tempe-based dishes such as 'Kadhele Tempe Srundengan', 'Brambang Jae Santen Tempe', and "Sambel lethokan."

Tempe culture is rooted in Javanese traditions associated with various rituals and community activities. Along with the mobility of the population, especially through the transmigration program, tempeh spread from Java to several areas outside Java. Today, tempeh has been known throughout the archipelago and adopted into various local recipes. Currently, there are around 170,000 micro, small and medium enterprises (MSMEs) of tempeh in Indonesia, with a production capacity of 50-200 kilograms of soybeans per day. Labor absorption is generally 3-5 people per business unit. To ensure the quality of tempe circulating in Indonesia, the Indonesian National Standard No. 3144 of 2015.

So far, the main problems in tempe production are sanitation and hygiene, namely those related to untrained workers; use of equipment that is not made of anti-rust materials, sources of water and fuel that do not meet the requirements; non-standard production methods; and inadequate production location and environment. Other tempe problems are related to short shelf life, market limitations, packaging technology and product diversification.

Tempe which is produced in a hygienic way, properly packaged, and equipped with various certifications will be easier to market at local, national, regional and international levels. Lately, tempeh is not only popular in Indonesia, but also in 27 other countries in the world. This is mainly due to the scientific evidence from various research results showing that the process of fermenting soybeans into tempeh provides more benefits for public health.

In addition to containing adequate macronutrients (protein, fat, and carbohydrates), tempeh is also rich in micronutrients (various vitamins and minerals), and is abundant in bioactive components (peptides, isoflavones, saponins, phytosterols, prebiotics, probiotics). The presence of all these components makes tempe as a functional food supporting public health at a relatively low price. Tempeh is the only plant-based food that contains significant amounts of vitamin B12, which vegetarians and vegans really need.

Prof. Made Astawan's research from the Department of Food Science and Technology, Faculty of Agricultural Technology, IPB University consists of Prof. Tutik Wresdiyati from the Department of Anatomy, Physiology and Pharmacology, School of Veterinary Medicine and Biomedical Science (SKHB) IPB University has proven that tempeh can be relied on as a source of vegetable protein. This is because the quality of protein is almost equivalent to animal protein sources.

Research by Prof. Made Astawan and his team also shows that tempeh can be used as a hypoglycemic functional food or lowering blood glucose in people with diabetes mellitus. Not only that, tempeh is also proven as a hypotensive food or lowering blood pressure in people with hypertension, hypocholesterolemic or cholesterol-lowering and preventing heart disease, as well as being a source of calcium that is as good as calcium from cow's milk, so it can be relied on to prevent osteoporosis.

"Because it has been proven to be healthy, tempeh has been designated as one of the world's nine superfoods. This makes tempe more in demand in the world and automatically the tempe market is wide open," said Prof Made.

To regulate the quality of tempe outside Indonesia, Codex Standards have been implemented since 2013. Fortunately, SNI has become a reference in the preparation of Codex standards, so that tempeh that meets SNI standards in Indonesia will automatically meet Codex standards.

"The lifestyle of the world community which is now starting to shift to Plant-based Food (plant-based food) and also the recommendation to implement the Global Planetary Health Diet (a healthy diet for the population and the planet) has encouraged more and more tempeh enthusiasts in the world," added Prof. Made Astawan, Chairman of the Indonesian Tempe Forum.

The opportunity for the tempe market at the global level has inspired Prof. Made Astawan, to foster Tempe SMEs so that they seriously apply hygienic production methods so that their products are export-worthy. One of the fosters is the Azaki Tempe House in Bogor, which since June 2021 has been
succeeded in becoming a supplier of tempeh for export to Japan. The success of tempeh exports to Japan was facilitated by PT Arumi Kharisma Indonesia in collaboration with Kobe Bussan Co. Ltd. In Japan.

The success of exporting tempeh to Japan is an extraordinary experience because the requirements are very complicated and strict, regarding sensory, physical, chemical quality, metal contamination and microbial contamination," he explained.

The collaboration between IPB University and Rumah Tempe Azaki, this year continues with funding from the Matching Fund 2022 scheme. This activity is chaired by Prof Made Astawan, involving a number of lecturers and S3, S2 and S1 students of IPB University. From this activity, Azaki Tempe House as an activity partner, will receive assistance with a number of equipment to support increasing production capacity and at the same time the quality of its tempeh for the export market.

"Exports of tempeh to various countries can not only be interpreted as an effort to increase economic added value, but also as a cultural export offering from Indonesia for the health of the world's population," concluded Prof. Made Astawan.

On August 10, 2022 to coincide with the Commemoration of National Technology Awakening Day (Hakteknas), IPB University through the Institute for Research and Community Service (LPPM) launched this tempe innovation, located at the Rectorate Building, Dramaga Campus, Bogor. (IAAS/STR)