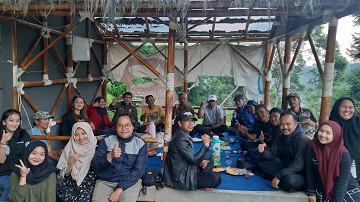 The Student Group for Thematic Real Work Lectures (KKN-T) IPB University held a forum for Optimizing the Role of Farmer Groups and Planning for the Initiation of Agricultural Cooperatives for Vegetable Farmers in Kertawangi Village, Cisarua District, West Bandung Regency, West Java Province. The activity was attended by representatives of farmers from each hamlet area, hamlet heads and village officials.

Felicia Miranda, student representative of IPB University KKN-T explained, this forum is the culmination of the activities of the "Ngariung Tani" program which has been running from June 22 to July 23, 2022. The Ngariung Tani program is carried out by direct visits to residents' agricultural lands for internalization and discussion on the state of land cultivation, the role of farmer groups and the existence of farmer cooperatives in Kertawangi Village.

“Ngariung Tani is the embodiment of the first farmer's forum to discuss strengthening the role of farmer groups. In the long term, this activity aims to facilitate the formation of agricultural cooperatives in Kertawangi Village,” he said.

Based on the results of surveys and interviews, Felicia and other IPB University KKN-T students concluded that one of the needs for the welfare of rural farmers is the role of farmer groups and the formation of farmer cooperatives.

Through collaboration with the Cipeusing Maju Farmers Group Association (Gapoktan), the IPB University KKN-T team in the "Ngariung Tani" forum acts as a bridge between the farmers of Kertawangi Village and the village government.

“This forum aims to have a dialogue and initiate the formation of farmer groups in each hamlet area. So that later it is hoped that a Farmers Group Association (Gapoktan) of Kertawangi Village can be formed,” added Felicia.

In addition, she said, the presence of farmer cooperatives in Kertawangi Village is important to overcome marketing problems and farmers' capital from middlemen. This is felt to have harmed rural farmers.

"Alhamdulillah, with the presence of IPB University KKN-T students who have conducted field surveys on agricultural land throughout the village area, it can be seen the findings of the real situation of the farmers. It turns out that farmers need the active presence of farmer groups in each of their hamlets,” said Manap, Head of Cipeusing Hamlet.

Kertawangi Village farmers also feel the benefits of this forum as a forum for farmers' aspirations. So that their concerns can be conveyed to village officials.