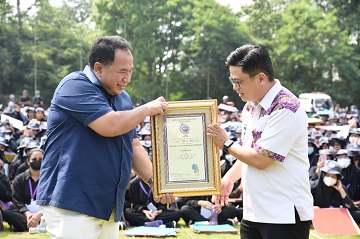 Gatamala Agrinawa, the name for new students of IPB University batch 59, managed to break the world record by the Record Holders Republic in the category "The World Biggest 3D" during the New Student Campus Introduction Period (MPKMB) 2022 which involved 3,700 new students in the Gymnasium field, IPB Dramaga Campus, Bogor (12/8).

Halim Sugiarto, Vice President of Record Holders Republic (RHR) said that IPB University made another new muri record for the sixth time by new students from batch 59 with a slightly different theme from the previous year, namely "The World Biggest 3D". The difference is, playing a little texture and shape. "So, they understand better and also they combine it with more colors and shapes than in previous years," said Halim Sugiarto.

RHR is a world records agency whose aim is to standardize, authenticate, register and regulate official world records with respect to time, distance and number.

RHR itself as a world record body, we record things that are indeed unique and there can be one number and then they are also done by skill and expertise. "This is a new record in itself, especially for IPB University. We will enter it on the World Record Holders Republic website to be recorded as the latest record in August 2022," he said.

Prof. Drajat Martianto, Vice Rector for Education and Student Affairs at IPB University congratulated the batch 59 students. "In fact, at first we had doubts, because this solved a difficult problem, there were 59 formations and 8 3D color combinations," explained Prof. Drajat Martianto.

"Why did we hesitate at first? Because, this generation of 59 students is an online generation. In high school (SMA) online. So, I think this is the first time they have been able to gather nearly 4,000 students but because there is a second party who is very extraordinary, the student commission with his team and there are teams from his seniors who are involved here, so the difficulties and doubts can be resolved," he said.

He added, "Of course this proves that if any difficulties are overcome with good teamwork with good preparation, mutual trust, mutual collaboration, then according to him, there are no more challenges that cannot be overcome," he explained.

"Once again congratulations to IPB University students batch 59 who are extraordinary. This record-breaking is your work and the certificate we received from RHR belongs to all of you," he added.

Dr. Alim Setiawan Slamet, Director of Student Affairs and Career Development (Ditmawa PK) IPB University said that record-breaking activities at every MPKMB event are not just to pursue prestige or style. "But there we want to provide a learning space both for new students as participants and for the committee," he said.

This means of course by preparing it very well. According to him, the committee is very creative in making the concept of designing the design then coding, preparing materials and so on. New students also learn how they must be solid, focused because if one or two of course this will not be good results and will damage others, including discipline and so on.

"The preparations made are very mature for this. Because this is a study room for new students, even though the generation is online, they are ready in the field. Congratulations to the new student, Gatamala Agrinawa, congratulations on entering IPB University, congratulations on your achievements, a big thank you for the entire MPKMB committee who prepared this event very well," he concluded. (Ns)