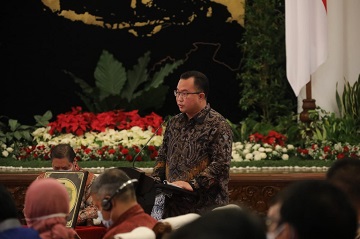 The Rector of IPB University, Prof. Arif Satria commented on the achievements of the Government of Indonesia from the International Rice Research Institute (IRRI), an international rice research institution, in Indonesia Greets Morning Pro 3 RRI with the topic "FAO and IRRI Acknowledging the Resilience of the Indonesian Agricultural Sector", (15/08). He appreciated the government's efforts for its success in not importing rice for the past three years.

He said in a telephone conversation that farmers also deserve higher appreciation because they are the most instrumental in this success. This good momentum can be used to encourage the realization of food security and self-sufficiency. Apart from the imminent food crisis, the Russia-Ukraine geopolitical crisis has implications for the blockage of grain supplies from the two countries.

"Indonesia must take advantage of this momentum to become more self-sufficient in food, no longer dependent on imports, because the risk is high and the nation's life and death depend on the agricultural sector," he said.

He continued, as an academic, the real conditions in the field should also not be ignored. The enthusiasm of existing farmers must be boosted again with various government programs. For example, by using new varieties to further boost rice productivity. This is evidenced by the recognition of Indonesia as the second highest country in Southeast Asia for rice productivity.

According to him, the capital subsidy program must also continue to be disbursed by the government so that farmers can breathe a sigh of relief. Because this sector benefits the most during the pandemic as a sector that grows positively. This phenomenon must be realized that the agricultural sector is very strategic and the COVID-19 pandemic has made the position of the agricultural sector even stronger.

“We need to take advantage of this momentum even more strongly so that it will not only achieve self-sufficiency in rice in the future, but also food self-sufficiency because wheat is still imported and the quantity is very high. We must dare to substitute imports with local products that can compete with wheat,” he added.

He continued that there should be a ratio policy, for example when importing 10 tons of wheat, it must also absorb 1-3 tons of local products. This policy will encourage faster village development and the problem of unemployment can be overcome.

“Young farmers who are agricultural graduates must also be encouraged. In addition, trade policies should be regulated and in favor of the domestic market in the long term. This requires a big commitment from all parties,” he added.
The food estate program also, he continued, can collaborate with young people who are still in college and synergize with the private sector. The private sector must also have a vision to strengthen Micro, Small and Medium Enterprises (MSMEs). This means that the market mechanism is good and the market climate is more conducive and friendlier to farmers. Thus the welfare of farmers can be maintained.

He advised the Indonesian people that the agricultural sector can be a mainstay during a crisis. The public must be optimistic that this sector can become a pillar of the national economy. “In the sense that the village can grow vigorously and have food security. Then industrialization in the future will be smoother because the foundation is already strong in the rural sector by supporting agro-industrialization so that added value will be enjoyed more than just primary value," concluded Prof. Arif. (MW/Zul) IAAS/ELS