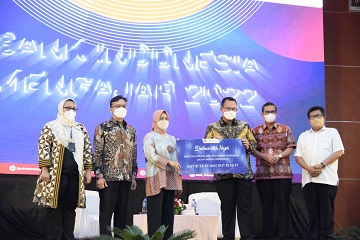 The Faculty of Economics and Management (FEM) IPB University in cooperation with Bank Indonesia (BI) conducted Bank Indonesia Mengajar 2022. Present as a speaker, an alumnus of IPB University who is also Deputy Governor of BI, Aida S Budiman, Phd. This moment coincides with BI’s 69th Anniversary. This event was held at the FEM IPB University Auditorium, Dramaga Campus, Bogor, 8/15.

Coinciding with BI’s Anniversary and The Anniversary of the Republic of Indonesia, Bank Indonesia handed over assistance for the Bank Indonesia Social Program. This hand over of aid was carried out by Aida S Budiman, Phd to the Rector of IPB University, Prof Arif Satria.

“This is part of BI’s dedication to the country and a real contribution in encouraging national economic recovery through economic empowerment and social concern as well as the development of superior human resources,” said Aida.

At the beginning of the lecture, Aida S Budiman explained the role of BI as central bank that has the sole goal of achieving and maintaining the stability of the Indonesian Rupiah currency. In addition, she said that current global economy is being marked by an increase in inflation in the middle amid lower-than- previously projected growth.

She said that in overcoming this, BI has long formed a Regional Inflation Control Team (TPID). In collaboration with local governments, there are currently 542 TPID in province and regencies/cities throughout Indonesia.

“TPID will ensure in terms of inflation including supply. This is Indonesia’s ultimate weapon for inflation and is not owned by other countries. In other countries such as America, if inflation is carried out, it will automatically increase the policy rate,” she said.

Aida also urged that through TPID, IPB University residents have the potential to help. “TPID’s job is that it must guard against inflation with affordability of food process, availability of supply, increase productivity, smoot distribution, effective information and communication,” she added.
On this occasion, Prof Nunung Nuryartono, Dean of FEM IPB University, appreciated BI’s high commitment to maintaining financial system stability as well as economic growth  with instruments that are stipulated by Bank Indonesia.
The Rector of IPB University, Prof Arif Satria expressed his gratitude to Deputy Governor of Bank Indonesia for the sharing delivered at IPB University. He hopes that this event can provide enthusiasm and inspiration for students.

He also said that what needs to be observed after this pandemic is the geopolitical situation of countries in the world. Reflecting on the Russian and Ukrainian wars, it turned out to have a tremendous multiplier effect, he said.  "It is time for Indonesia to be confident in local products to substitute expensive wheat. Wheat substitution can be done with breadfruit, sago, cassava, mocaf which are local potentials," he concluded. (dh/Rz) (IAAS/GHN)