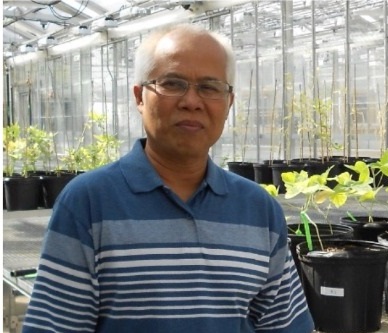 Prof. Miftahudin, Professor of the Faculty of Mathematics and Natural Sciences (FMIPA) IPB University succeeded in finding plant genes that are tolerant of drought and aluminum (Al) stress. In his research, he succeeded in identifying four candidate drought tolerance genes and five candidate Al stress tolerance genes. One of the interesting genes is the OsGERLP gene, which can cause transgenic tobacco to tolerate Al stress and low pH. He said this during a press conference for the professor's pre-scientific speech which was held online, 9/6.

Prof. Miftahudin explained, based on testing with biotechnology, the OsGERLP gene proved that it could control root hair formation and root growth under Al stress conditions. To prove that the OsGERLP gene is really a gene that plays a role in Al tolerance, this botanist from IPB University combined the gene in the Al-tolerant Hawara Bunar rice variety with RNA interference technique, so that the gene did not function.

"The results of the experiment showed that the Hawara Bunar variety, which was originally Al tolerant, became Al sensitive after transplanting the OsGERLP gene. This proves that the OsGERLP gene plays a role in the tolerance of rice plants to Al stress," said the IPB University lecturer who got the 2nd highest H-Index Rank in Natural Sciences at the 2019 IPB PubliAwards.

Prof. Miftahudin continued, based on gene expression analysis using real time PCR (RT-PCR) led to the assumption that the OsGERLP gene is the main regulator of several Al stress tolerance genes in rice. Thus, he said, the OsGERLP gene could be used to develop plants tolerant stress of Al and low pH.

The Head of the Biology Department of IPB University continued, the use of genes to increase food crop tolerance in rice, soybeans, and potatoes is moderate and will be carried out both through introgression and biotechnology approaches. He also recommended that current and future plant breeding should be able to take advantage of advances in plant physiology, genomic technology, bioinformatics, and biotechnology in order to obtain precise results. (IAAS/ASJ)