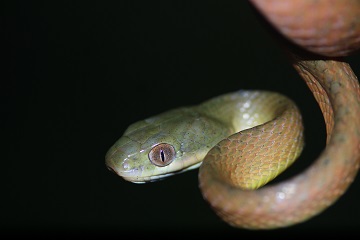 The Fauna Conservation Union(UKF) IPB University conducted an exploration at the Cikepuh Wildlife Reserve, Citirem Block, 14-16/5. This activity was carried out as a stage of education for the prospective new members of the Fauna Conservation Union. Through this activity, each new member is taught to go directly and conduct research, before later becoming a reliable field researcher.

In this exploration, the Exploration Team generally conducts an inventory of the diversity of wildlife ranging from mammals, insects, herpetofauna, macrozoobenthos, and birds. The team also conducted a suitability analysis of coastal forest vegetation. The Head of UKF Division, Pustaka Suratama, said that the Exploration XX activity was aimed at increasing the understanding of new members of UKF IPB University on wild nature research methodologies and data analysis.

One of the exploration participants, Muhammad Ammar Raihan who is a prospective member of the Amphibian Reptile Conservation Division, UKF IPB University said that exploration is indeed an activity that is not only fun, but also has many benefits. “One of them is that we (prospective new members) learn many new things to identify the species that exist in the observation location. Even though various obstacles were present during the observation, we were still enthusiastic about collecting data. Through this activity, I became more motivated to participate in fauna conservation efforts,” he said.