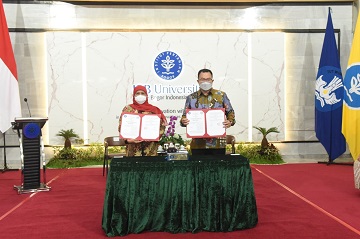 IPB University collaborates with the East Java Provincial Government regarding education, research, community service and human resource development. The memorandum of understanding of cooperation was signed by the Rector of IPB University, Prof. Arif Satria with the Governor of East Java, Khofifah Indar Parawansa at the Dramaga Campus of IPB, Bogor, (22/1).

In his remarks, Prof. Arif said that the task of IPB University was to produce graduates and innovations that excel in agriculture. According to him, the innovations produced by IPB University require a scale up in order to have a wider reach. "We are now continuing to develop for industry 4.0. That is the acceleration for the transformation of agriculture in Indonesia so that they can immediately adapt to the latest technology that is wiser so as not to leave social problems," he explained.

Prof. Arif, further, introduced One Village One CEO (OVOC) which is one of the rural business ecosystem innovation programs based on the empowerment of Village Owned Enterprises (BUMDes). Its activities consist of land facilitation, capital, assistance, technology and market partnerships with offtakers who will form an integrated ecosystem from upstream to downstream.

He said OVOC has been developed in 53 villages in West Java and this year will be added to 100 villages throughout Indonesia. "Alhamdulillah, in East Java, OVOC also wants to be developed to strengthen BUMDes. With this, many products can be processed into products that have added value. We hope that OVOC will become a new growth center in Indonesia that can increase people's welfare," he said.

Hearing this, Khofifah Indar Parawansa wanted to develop OVOC in East Java. She said that the raw materials owned by each region in East Java have the potential to be developed and will be part of the importance of the CEO in each village. According to her, OVOC is something that will generate new innovation and creativity for BUMDes leaders.

“This means that we are very serious about intervening in the strengthening and independence of villages, including BUMDes. There are innovations related to this downstreaming which is an important part. Do not export raw materials. So do downstreaming and then export it, you will get a greater added value of the product," she said. (dr/Zul) (IAAS/HAR)