Why are There More Male Chefs than Female Chefs? IPB University Expert Responds 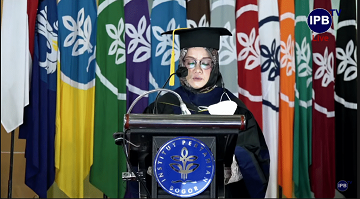 Professional cooks or chefs are mostly men because women are considered sensory unstable. Is this a fact or a myth?

IPB University expert from the Department of Food Science and Technology, Faculty of Agricultural Technology (Fateta), Prof. Dede Robiatul Adawiyah denied this. He explained that in his research that calculated the sensory threshold value, it turned out that there were differences between men and women.

"Women are more sensitive. Have the ability to detect sweetness, at lower concentrations, when compared to men. But there is a weakness in women. Which is the existence of the menstrual cycle and pregnancy that inevitably affect a person's sensitivity. So that in sensory testing, there are gender provisions. It can't be just men or women. It has to be balanced,” he explained in the Pre-Oration Press Conference for the Inauguration of Permanent Professors, (16/12).

That's why, she continued, only men can become chefs is a myth. Sensory abilities are not determined by gender. So to determine whether someone is worthy as a panelist (in sensory research), what is needed is sensory consistency.

“A person is considered to have a good performance in sensory evaluation, which is determined by several provisions. That is being able to detect or distinguish and have consistency or can provide the same value from time to time with the same product," she added.

According to her, there is no provision for a man or a woman to be a chef. But it is recognized that men are more consistent. Because they are not affected by varying metabolic cycles.

“To produce the same food product from day to day, consistency is needed. That might be the tendency why many chefs are male,” he explained.

Meanwhile, in his material entitled The Role of Sensory Science in Product Development in the Food Industry, Prof. Dede also explained related to sensory science and its test methods in the food industry. According to her, currently, there are many sensory test methods (more than 30 methods). And these methods are more quantitative than qualitative methods.

“In recent years, there has been a paradigm shift in the use of sensory test instruments from trained panels to consumer panels. This is favored by the food industry because consumers are the end-users of the products they produce,” he said.

According to him, the industry's ability to understand the position of the product from a sensory perspective of the product category on the market, including competitors' products, is one of the factors that determine success in the market.
He added that the use of humans as measuring instruments within the scope of sensory science will continue to be used and developed in the future. However, the challenge is controlling the human or sensory panels used.

"Calibration techniques and validation of sensory panels need to be established and standardized to ensure that the sensory measurement results produced are valid, reliable, and scientifically accountable," he explained.
He added that the differences in culture and eating habits in each country caused differences in sensory perception. Understanding the aspects of consumption and social behavior in each country is key in this global business.