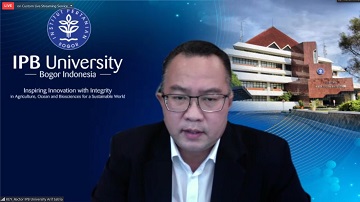 Prof. Arif Satria, Rector of IPB University said that science and technology will play an important role in the Asean Chairmanship 2023. "The New Economy is often compared to the industrial revolution where there is a parallel between the two. The effects of the internet will be even greater, not only in the industrial sector.  but also in all aspects of life including sociology, psychology, culture, politics, science, and other fields," he said in the International E-Seminar: Towards Asean Chairmanship 2023 which was held by the Business School of IPB University, some time ago.

This seminar is a collaboration between IPB University and the Indonesian Ministry of Finance with the theme Advancing the Concept of ASEAN Regionalism: Regional Value Chain and Connectivity, Recovery, and Collective Competitiveness.  The seminar was attended by more than 150 participants from 14 countries.  Namely Indonesia, Vietnam, Bangladesh, South Korea, Pakistan, Malaysia, Philippines, India, Afghanistan, United Kingdom, Japan, Australia, England and the United States.

This seminar also presented Suahasil Nazara (Deputy Minister of Finance of the Republic of Indonesia).  He said that ASEAN cooperation was very important in promoting better connectivity and global value chains among ASEAN countries.

“Indonesia will be able to play a very active and significant role in international forums.  So it is very important for us to set the agenda in a very strategic way,” he explained.

Febrio Kacaribu as Chairman of the Fiscal Policy Agency (BKF) was also present to convey related to the digital economy in ASEAN and how Indonesia's contribution to finance in 2023. “Fast progress in digitalization will increase, grow, and strengthen ties between regions.  However, several challenges remain, including ensuring financial stability, capital flow management, and data protection transparency," he explained.

Meanwhile, Prof. M Syamsul Maarif as Head of the Postgraduate Study Program of the Business School of IPB University said that in human capital development, capacity building strengthens the creation of superior talent.

“This superior talent can be developed through education.  This is important in developing the country, especially developing countries like Indonesia," he added.

In addition to presenting experts, this seminar also gives awards to the participants.  There are three award categories given, namely Best Paper, Best Recorder Presenter and Best Live Presenter.