Only 7 Percent of Corals Live on Mandangin Island 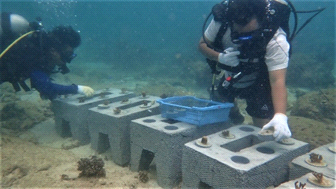 Observation results show that the condition of coral reefs around Mandangin Island, Sampang Madura is quite worrying.  Only a maximum of seven percent of live coral remains.  There are strong indications that this damage was caused by anthropogenic factors, not naturally.

Therefore, earlier this December, the Center for Coastal and Marine Resources Studies (PKSPL) IPB University, Husky-CNOOC Madura Limited (HCML) and the people of Mandangin Island initiated the rehabilitation of coral reef ecosystems.  This activity began with the laying of the transplant module around Candin Beach.

Muis, Head of the Community Monitoring Group (Pokmaswas) stated that the damage to coral reefs on this island has occurred since 1989. The impact of massive coral extraction for commercial purposes.

“People deliberately take live corals and sell them for decoration in the aquarium.  This practice ended in the 2000s when some were arrested by the security forces.  However, the practice of taking coral is still running but for building construction purposes.  What we have now is the rest," he said.

As part of the company's environmental and social responsibility, Husky-CNOOC Madura Limited (HCML) is looking for alternative socio-economic forms that can reduce the rate of environmental damage on Mandangin Island.

HCML cooperates with PKSPL IPB University as the formulator of the concept and becomes a community companion.  In addition, HCML also allows their land concession areas to be used as tourist destination spots that will be managed by the village.  The integration between land and sea rehabilitation with sustainable use is expected to contribute to an alternative economy.

The implementation of activities starts from October 2021 with mapping and observation as well as a survey of the potential for marine ecotourism as well as discussions with related parties such as village officials, BUMDes and Karang Taruna.

In addition, a coral reef observer group was formed as an implementing/management group, making modules for attaching transplanted coral fragments, collecting coral fragments and checking locations.  The type of module made is a concrete module which can also function as a shelter/fish house, while the types of coral to be transplanted are branching corals and massive corals.

"We are happy that HCML and IPB University are willing to join us in developing tourism on this island as long as it is done seriously and sustainably.  Later, rules will be made so that no party destroys what is being worked on together," said Saiful Anam as the Village Head or Klebun Pulau Mandangin Village.

Novit Rikardi, a coral reef researcher at PKSPL IPB University, emphasized that the main point of this initiation effort was public awareness of the benefits and importance of maintaining and maintaining coral reef ecosystems.  "This effort is also part of PKSPL-IPB University's support to support the implementation of the 2030 Sustainable Development Goals (SDGs), especially SDG 14: life below water," he added.  (yc/aaf/Zul) (IAAS/ADV)