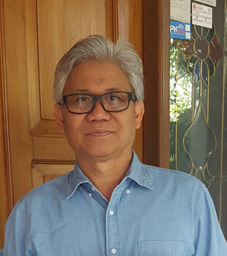 Many people and environmentalists think that shrimp ponds have a major contribution in reducing the area of mangrove land. So that the increase in shrimp production is considered to be a threat to the existence of mangrove forests.

To overcome this, the Professor of the Faculty of Fisheries and Marine Sciences (FPIK) IPB University made Biocrete technology. Prof. Bambang Widigdo made a Biocrete innovation that can overcome the porosity of sandy land.

"Shrimp ponds can be developed in sandy coastal areas without destroying mangrove forests," he said in the Scientific Oration for the Appointment of Permanent Professors at IPB University, last weekend.

This innovation, he added, is in accordance with the government's target of increasing exports of shrimp from ponds to reach 250 percent by 2024. Therefore, the development of ponds on sandy land will greatly reduce the ecological pressure of mangrove forest areas.

In addition to explaining biocrete technology, Prof. Bambang also explained about the control system for the implementation of shrimp farming in the field.

“This will create new vulnerabilities related to the use of hazardous chemicals, especially antibiotics to avoid various pathogenic microbes. To overcome this, we need a system that can control the implementation of cultivation in the field," he explained.

According to him, one control system that has been tested enough is to develop a Standard Operating Procedure (SOP) based on the principle of Hazard Analysis Critical Control Point (HACCP), or HACCP-based-SOP.

"This management system is the preparation of aquaculture procedures that have accommodated the identification process of every possible hazard that can thwart production, and/or cause health problems for people who consume shrimp," he added.

In shrimp farming, Prof. Bambang explained that a hazard is defined as a source or situation that has the potential to cause shrimp to get sick or be contaminated with materials that cause health problems for consumers, such as viral diseases, water contaminants, and antibiotic residues.

"If each stage of cultivation has known the potential hazard, the threat of shrimp disease will be avoided earlier so that it does not spread. Likewise, the possibility of the entry of materials that endanger the health of consumers such as antibiotics can be prevented," he added.

That way, he added, in the future, cultivation technology will be more advanced and the world's supply of shrimp will also increase.

“Increasing offerings in the global market will require us to have more product advantages than our competitors. Only a control system that can guarantee product quality and safety will have high competitiveness in the global market. Now is the time for us to implement a modern cultivation system that is environmentally friendly and by prioritizing a control system such as HACCP-based-SOP," he said. (zul) (IAAS/PEH)