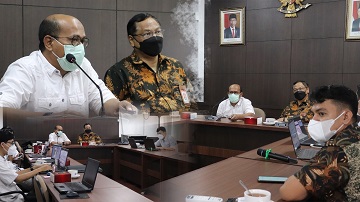 The success of the Precision Village Data (DDP) in building Village Government Schools (SPD) has become a unique attraction for various institutions. This time, the Pancasila Ideology Development Agency of the Republic of Indonesia (BPIP RI) was interested in DDP. The interest led to holding a Focus Group Discussion (FGD) with the Institute for Research and Community Service (LPPM) IPB University, 19/11.

The FGD discussed how the Pancasila ideology promoted by BPIP RI could be implemented in all community service programs at IPB University. Especially in the ongoing SPD program.

Dr. Sofyan Sjaf emphasized that the community service program was held based on accurate data from precision village data (DDP). According to him, SPD is one of the efforts to improve village data in Bogor Regency.

The Deputy for Inter-Institutional Relations, Socialization, Communication and Networking, Ir. Prakoso, was also present at the FGD, accompanied by the Director of Culture of BPIP RI, Irene Camelyn Sinaga.

On this occasion, Prakoso welcomed the ideas and programs presented. In addition, he proposed to include the ideology of Pancasila in every service activity carried out by IPB University.

"Our effort is how this ideology can be conveyed in special sessions, in every program implemented at IPB University, especially in this SPD program," said Prakoso.

Meanwhile, Rajib Gandhi said that the Pancasila ideology in the teaching process at SPD needed to be strengthened by the presence of BPIP RI in the classroom. "We continue to strive to improve teaching in SPD, especially in the field of government, and it will be more perfect if the presence of BPIP RI brings Pancasila ideology into the classroom," concluded Rajib Gandhi, Principal of the Village Government School.

Irene Camelyn Sinaga said that the role of BPIP RI and strengthening the Pancasila ideology could also open new insights in implementing it in society. "I hope that BPIP RI must not only bring the ideology of Pancasila, we also try to open the horizons of the SPD participants, so that after graduation SPD participants not only understand but can also apply," said Irene Camelyn, Director of Culture of BPIP RI. (*) (IAAS/ERN)