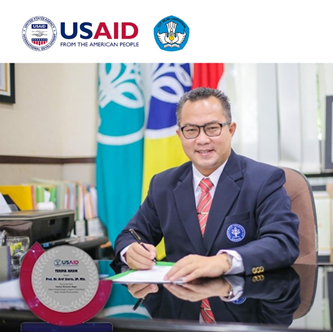 Rector of IPB University, Prof Arif Satria, has received an award from the United States Agency for International Development (USAID) and the Indonesian Ministry of Education, Culture, Research and Technology (Kemendikbudristek). The award was presented by the Director of Learning and Student Affairs, Directorate General of Higher Education under Kemendikburistek on October 5th. The award was given to 8 rectors and 3 polytechnic directors whose institutions have participated in the Thematic Student Study Service on Entrepreneurship known as KKNT-TKWU.

Nadiem Makarim, the Minister of Kemendikburistek, relayed in the National Conference of Inclusive Employment and Entrepreneurship Initiative about how the Independent Campus, Freedom to Learn program (MBKM) was a response to the global trend. The global trend itself is a far rapidly changing trend where occupations disappear at the same time new ones appear. We are encouraging students to learn outside of campus in order to learn of the present challenges.

According to Nadiem, KKNT-TKWU is an implementation of MBKM and that students participating in the program could get the opportunity to develop their entrepreneurial skills as preparation for future challenges.

KKNT-TKWU has contributed to the development of inclusive employment and entrepreneurship in various areas. With the collaboration of Kemdikbudristek with USAID, there are now 3.100 villages in 146 regencies which are part of the program.

The Director General of Higher Education under Kemdikbudristek, Prof Nizam, conveyed that through the MBKM program, students with interest in entrepreneurship no longer see lectures as hurdle. Their interest can now be bridged through this program, encouraging their passion and potentials to reach great lengths. According to Prof Nizam, Indonesia currently has the most start-ups in South East Asia. It is an achievement which should be maintained and campuses could support the establishment of other successful start-ups. Through this program, Prof Nizam expressed his hope for more higher education institutions to support independence of their students’ potentials.