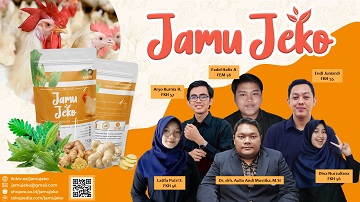 The innovation from the IPB University student team is part of the Student Creativity Program in the field of Entrepreneurship. This program received funding from the Ministry of Education, Culture, Research and Technology.

"JEKO herbal medicine is a combination of ginger, meniran, kencur, and bitter herbs that play a role in improving the quality of life and accelerating growth in broiler chickens," said Latifa Putri.

The IPB University student explained that the feed additive made in the form of Jamu JEKO acts as an alternative to feed additive antibiotic growth promoters in broiler chickens. She admitted that JEKO herbal medicine is safe, effective, efficient, and has affordable prices, especially for independent farmers. This product can be added to broiler chicken feed and drinking water.

"JEKO herbal medicine can have a positive effect on immunity due to disease and can be used as a complement to the feed provided by farmers," said Latifa Putri.

Furthermore, Latifa said, JEKO herbal medicine has advantages such as the ingredients used come from nature without a mixture of preservatives. Not only that, this herbal medicine is also claimed not to be harmful to the environment and other living things.
"JEKO herbs also play a role in increasing the weight and quality of livestock, increasing the effectiveness and efficiency of feed, stimulating the digestive enzymes of livestock and increasing appetite in livestock," said Latifa.

Another advantage of JEKO herbal medicine is that it can increase the immune system of chickens from viruses, bacteria, and other diseases. This herbal medicine is also believed to reduce the smell of ammonia from chicken manure, as a feed additive that does not leave chemical residues, and reduces the risk of microbial resistance.
Jamu JEKO is presented in a standing pouch equipped with a ziplock in sizes of 500 gr and 1 kg for Rp 40.000 and Rp 60.000 in each size which can be found in various marketplaces and social media @jamujekoofficial. (*/RA) (IAAS/AML)