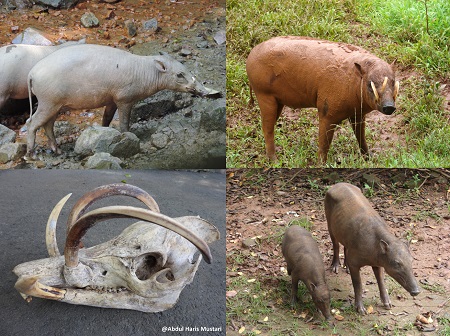 As a country with high biodiversity, Indonesia has enormous potential. Dr. Abdul Haris Mustari, lecturer at the Department of Forest Resources Conservation and Ecotourism (KSHE), Faculty of Forestry and Environment, IPB University introduced one of the unique animals, Babyrousa sp.

Babyrousa sp or better known as babirusa is an endemic animal to Sulawesi, the Sula Islands, and Buru Island in North Maluku. The male babirusa has two large fangs (up to 300 mm in length) resembling a "horn" which in English is called "tusk". These fangs pierced the skin of the snout until it protruded crookedly backwards until in front of his eyes.

"In females these canines are shorter or do not even grow sticking out like in males. The male babirusa is the only animal in the world that has it,” he said.

He said that both male and female babirusa reach sexual maturity at the age of 5 - 10 months, but there are also reports at the age of about 548 days, with the maximum longevity reaching the age of 23 - 24 years.

"A female mother only gives birth once a year with a gestation period ranging from 155-158 days.
The number of children of a female babirusa each time giving birth is 1-2 tails with a baby weight at birth of about 0.715 kilograms. The length of time the child is breastfed by the mother is about 1 month, but there are reports that the length of the child's period with the mother is up to 213 days and after that the child is weaned to look for food on his own in the forest," he explained.

"Observers can recognize the babirusa from the sound they make because when walking in groups, the babirusa often makes regular and reciprocal sounds, small and long, namely suirii.... ... soooooooooooo," he explained.

According to him, the best chance to meet the babirusa is by observing at a drinking water source or a wallow that is usually visited by the babirusa in the summer. This wallowing habit, he said, was intended to get minerals or small animals (larvae, worms or caterpillars) as a source of animal protein.

“Babirusa often rubs his body against the base of tree trunks after wallowing. This may be done to reduce the thickness of the mud on the body or to get rid of fleas that are considered annoying," he added.

He said there are four species of babirusa found in Indonesia, three of which are still alive today and one species has become extinct.

The first is the Sulawesi Babirusa or Babyrousa celebensis which is short in stature and has sparse hair so that it looks naked from a distance.

Third, Babirusa Togean or Babyrousa togeanensis. The Togean Babirusa has hair on the body short and sparse in comparison, the tail is well developed, the upper canine teeth in males are usually short, slender, this subspecies is the largest in size, but the teeth are small.

Fourth, Babirusa Bolabatu or Babyrousa bolabatuensis. This type of babirusa is extinct, only found in fossil form in the southern peninsula of Sulawesi. (SWP/ZUl) (IAAS/SYA)