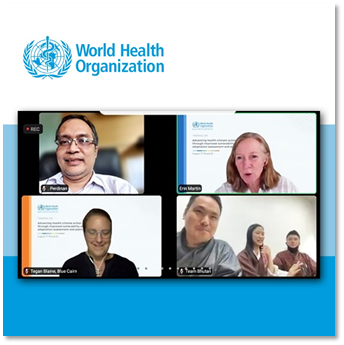 Two lecturers of IPB University who are part of the Indonesian Ministry of Health and the World Health Organization (WHO) Indonesia, were present at the WHO South East Asia workshop to present Indonesia’s plans of adaption towards climate change in the field of health on 17th-19th and 25th of September, 2021. The lecturers were Perdinan, PhD (lecturer of IPB’s Department of Geophysics and Meteorology) and Ikrom Mustofa, SSi, MSc (Head of Disaster Policy Division, IPB University’s Center of Disaster Studies).

Perdinan plays the role of one of the experts in the formulation of Indonesia’s adaptation plan towards climate change in the field of health within the Indonesian Ministry of Health. The discussion itself consisted of two parts which were the efforts put into adapting towards climate change for the field of health and the plans for its implementation (National Adaptation Plan called the H-NAP). Perdinan explained that Indonesia wishes to receive inputs and learn from other countries attending the workshop to develop and perfect both Indonesia’s efforts and plan. Perdinan also conveyed that IPB University’s role in this workshop was fulfilled through the contributions which have been given towards the development of an inclusive and sustainable nation.

The workshop was facilitated by experts and facilitators from Blue Cairn under the guidance of WHO SEARO and was attended by country representatives from South East Asia who were stakeholders in the fields of climate and health. Attendees include academicians and ministry board members. Through this workshop, each country is encouraged to produce a short plan detailing the steps they would take to improve their National Adaptation Plans in each of their countries. To optimize involvement, information exchange, and the advancement of plans in each country, presentations were held at the end of the section, allowing each country to present their progress and plans. Generally, in this presentation, Indonesia relayed a SWOT analysis for the national adaptation plan towards climate change on the health sector. The Indonesian team representative also relayed the stakeholders involved in the implementation of the plan on all layers and regions.