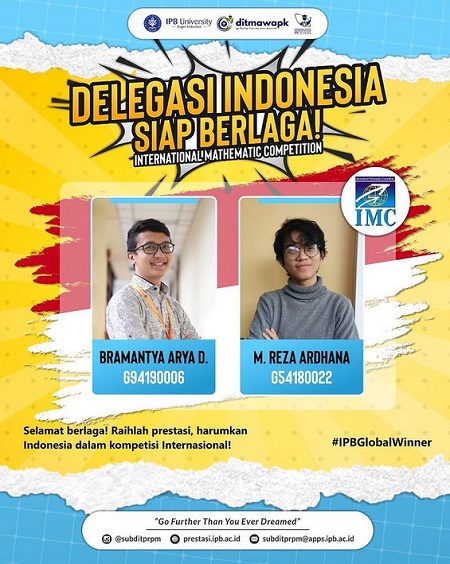 Bramantya Arya Dewantara or who is often called Ary said that to be able to represent Indonesia is not easy.  In addition to participating in various competitions, Ary also has to arrange study time to prepare for the National Mathematics and Natural Sciences Competition (KNMIPA) in order to win.
KNMIPA is a national level science competition for higher education consisting of Physics, Chemistry, Mathematics, and Biology.  Ary followed KNMIPA in Mathematics.  Thanks to his hard work, he finally had the opportunity to become an Indonesian delegate in the International Mathematical Competition (IMC) after receiving an honorable mention at the national KNMIPA.

"The stages are following the entire series of KN-MIPA selection in the field of mathematics, starting from the selection at the IPB University level, participating in coaching, to obtaining an Honorable Mention at the national level," said Ary, (16/7).

He will take the opportunity to make Indonesia and IPB University proud.  Ary said that he would maximize the opportunities available by participating in the whole series of coaching seriously.  He will also take care of his health so that he will be more ready to face IMC later.
"Hopefully I can give maximum effort and give the best results later. Because this is one of the very big opportunities that have been given to me," hoped Ary.

The student from the Actuarial Study Program then shared tips and tricks to get to that point.  According to him, first, don't be afraid to try.  Whenever an opportunity comes, don't hesitate to take it.
Second is commitment.  When you have decided to take the opportunity, you must give your best effort to get it.

"The third is tawakkal. After giving the best effort, the rest is to continue praying and leave it to Allah. Believe that Allah has prepared the best results for us," he said.

"I also enjoy participating in Olympic-type competitions, so I get a lot of experience in working on Olympic questions," said Reza.
With that in mind, he was finally able to become the Indonesian delegate in the IMC.  Of course he has gone through various stages like Ary.  Starting from the selection of KNMIPA at the IPB University level in mathematics, the selection of the West Java region, then the selection at the national level to getting a bronze medal.

"Hopefully the team from Indonesia can win at the IMC event this year and can make the nation's name proud in the international arena as well as the name of IPB University," he concluded.  (MHT/Zul) (IAAS/Adv)