The only one in Bogor, IPB Language Academy Soon to Open IELTS Test Venue 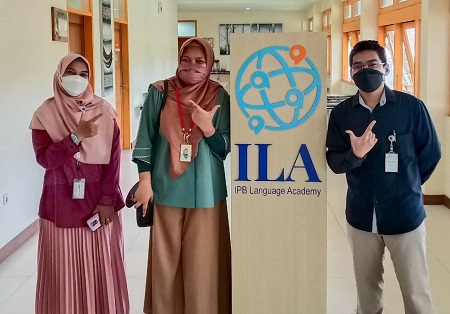 After launching the IPB Language Academy (ILA), IPB Training began to run several activities such as courses and tests. As one of the language skills institutes in Bogor, ILA prepares various licensed tests.

“Until now, Bogor does not have its own test site, so IELTS test candidates must take the test in Jakarta. Plus, during the COVID-19 pandemic, the nearest test site, in Depok, was also not operating," said Puspita.

He further explained that the exam venues managed by ILA will make it easier for candidates to apply for scholarships and continue their studies.

Puspita added that the Taman Kencana area of IPB University as a test site has additional points because of the beautiful atmosphere. Ease of access will also help participants such as waiting room facilities, toilets and prayer rooms.

During the audit process, Puspita inspects all elements, starting from the physical building, the completeness of the facilities according to the requirements to the quality of the sound system for listening test purposes. Puspita said that the available facilities had met the requirements proposed.

The Director of IPB Training, Muhammad Sigit Susanto, hopes that ILA will continue to complete its program portfolio. "In addition to preparing English courses, ILA also provides Indonesian Language courses for Foreign Speakers (BIPA), German, Japanese, Mandarin and French. Later, we will hold various tests, both for the internal needs of IPB University and the general public," he said.

In addition to providing an IELTS test venue, ILA plans to open a test location for the Test of English as a Foreign Language (TOEFL) and Test of English for International Communication (TOEIC). ILA will provide international licensed full package tests for individual customers, corporations, government agencies and education. (Ghina)