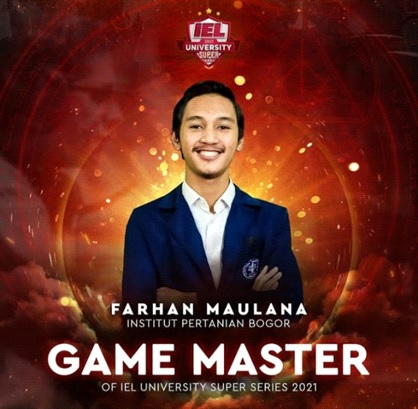 This is the first time IPB University joined the biggest E-Sport league between universities in Indonesia. It was at this moment that the IPB University team managed to snag three awards at the same time. These include nominations for Game Master, Super Ambassador and Most Favorite Campus PUBGM.

“Most Favorite Campus was brought home by none other than IPB University’s Team themselves. This was thanks to the votes given by IPB University’s supporters and the support given by the team manager of IPB E-Sport. We know that in Most Favorite Campus, we want to show that IPB University can win. IPB University is not only rich in academic resources, but also non-academic resources that can achieve prestige,” said Muhammad Ridho Notonegoro, Founder of IPB E-Sport. According to Ridho, prestige achieved by IPB E-Sport was only possible through the support of many people. From players, coaches, management and other stakeholders.

The Assistant Director of Character Development Ditmawa PK, Dr Beginer Subhan mentions, “In the era of Merdeka Belajar Kampus Merdeka, competitions are a big part of a student's learning development. Especially in character and soft skill building. It is hoped that achievements here will be followed by achievements in other fields,” he concludes

In this competition, the Game Master winner was achieved by Farhan Maulana, a student from the Department of Biochemistry, Faculty of Mathematics and Natural Sciences (FMIPA). Farhan defeated dozens of competitors from other campuses. The Game Master competition is a competition where participants are challenged to create rules and services for online games.

Aside from Game Master, IPB University also achieved the IEL Super Ambassador achievement by Kenia Maulidia. Kenia is a student of the Statistics Department, FMIPA. Kenia was also a PUBG Mobile IPB E-Sport player. Her charms inside and outside the game are undoubted. To become an IEL Super AMbassador, you would need an extensive knowledge on E-Sports and supported by appearances in and outside the game. This isn’t her first awards as an Ambassador since she before achieved the Runner Up of PUBG Mobile Campus Ambassador 2020.

Meanwhile in the PUBGM and DOTA 2 matches, IPB University reached 10th from 32 competing universities in the PUBGM category. For the DOTA 2 category, the IPB E-Sport team was eliminated in the group stages. In the Ultimate Cosplay category, IPB E-Sports team achieved top 16. (**/Zul)