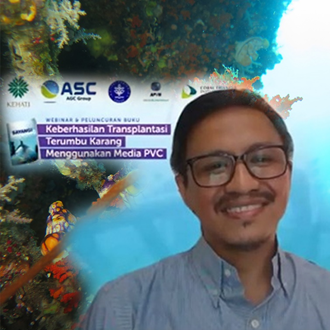 The Coral Triangle is known as a geographical term for a marine area of high importance where 75% of the world’s coral reef species live. The area provides a visual picture of how rich Indonesia’s biodiversity really is. Unfortunately, it has not been well preserved. In the momentum of the Coral Triangle Day commemorated on June 9th, the Kehati Foundation (working for the conservation of Indonesia’s Biodiversity), has held a webinar titled the Success of Coral Reef Transplantation using PVC Media. The webinar focuses on coral transplantation efforts which have begun on 2018 in Sangiang Island located in the Sunda Strait.

Present at the event as the main speaker, Dr Hawis Maddupa, Head of IPB University’s Department of Marine Science and Technology, presented about coral transplantation as an effort of the coral reef ecosystem rehabilitation. In the webinar, Dr Hawis spoke as the representative of IPB University’s research team in marine biodiversity.

According to Dr Hawis, Indonesia is almost exactly located in the center of the Coral Triangle which is widely known as the home for the world’s highest ocean biodiversity. The IPB University expert in marine biology explained that nearly 76% of coral reef and 37% of fish species can be found in the triangle. The area is joined with the Indo pacific area and it has been found through research that 55% of coral fishes also reside in the area. Therefore, it is crucial for multiple parties to ensure the conservation of these marine biota, especially considering the high threat of exploitation, including overfishing and pollution. Dr Hawis further mentioned that an estimate of 30% of Indonesian coral reefs has coral cover of more than 50% which is categorized as very good. While the remaining 70% has less than 50% of coral cover according to the COREMAP-CTI (Coral Reef Rehabilitation and Management Program-Coral Triangle Initiative) survey held in 2020. Interestingly, Indonesia’s coral reef condition depends on its geographical location (west, central and east). The main difference is seen in the percentage of coral cover, with a huge difference found in the west as it faces high pressure. To overcome this, a good management system and effort in improving the poor coral reef conditions are a must.

The presence of high pressure influences the main component of the reef ecosystem, causing it to experience a slow growth. The reef must go through hundreds of years to finally become a suitable home for marine biota and organisms, and to gain the structure it needs to protect the coastal areas. Therefore, reef transplantation is needed to support a healthy coral reef ecosystem.

In addition, other supporting methods such as the eDNA technology for the biomonitoring agenda needed to estimate and record the growth of transplanted coral are also required. These methods are useful to increase the survey accuracy as a simple visual survey would not provide adequate accuracy. With this technology, next generation biomonitoring could reveal native, introduced and invasive species in the early stages of coral transplantation and act as an early warning system established through monitoring.