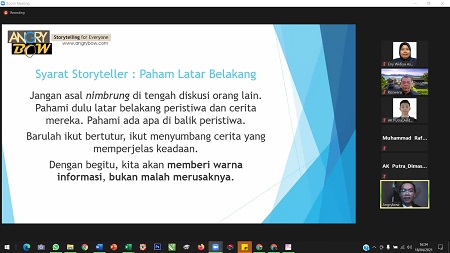 Age may be young, not many experiences, but when enthusiasm and attention are fully devoted to a field, it is not impossible that young people with high potential will be born. This has been proven by IPB University which has succeeded in discovering talents from its students in the world of writing.

Through the Storytelling workshop which began on April 18, 2021, it was seen that four training participants had succeeded in carrying out almost perfect writing assignments. In their work, they have applied the collaborative concept of AIDA (Attractive, Interest, Desire, and Action), Feature and Inverted Pyramid.

They are Muhamad Husni Tamami, Reru Dharmastiawan, M. Arie Pratama and Endi Juniardi. "The four IPB University students, in their skillful way, succeeded in applying the collaboration concept of AIDA, Feature, and the Inverted Pyramid into their writing," said the Storytelling Workshop Trainer, Angiola Harry.

According to him, the writings they produced had succeeded in showing the distinctive features of their writing style. "There is a journalism style, copywriting or commercial writing, and there is a novelist style," he continued.

According to Angiola, the participants who took part in the training generally had excellent writing skills. "Maybe they used to write frequently in the mass media or have won competitions, what is certain is that the results of their writings are good," he said.

One of the best four participants is Muhamad Husni Tamami, who turns out to be a student who has had achievements in writing since he was in high school.

Husni has published books and also founded the MHTnesia Center which has programs engaged in education and social humanity.

"It is an honor for me to be able to train them," said Angiola, who works as a journalist and photo contributor for national and international media.

As for the collaboration method, Angiola explained that storytelling is a technique of expressing an intention, both opinion and presentation in a storytelling style.

According to him, the combined concept of AIDA, Feature, and the Inverted Pyramid is a good story maker. The collaboration of the three will quickly make it easier for someone to understand what is written or told. By having storytelling skills, Angiola believes, someone will easily handle mass communication.

"They will later go into society and the world of careers. So they must have adequate mass communication skills," said the man who has received various journalism short courses at home and abroad.

Meanwhile, according to Dr. Beginer Subhan, Assistant Director for Character Development, Directorate of Student Affairs and Career Development (Ditmawa PK) IPB University, it is hoped that the participants will be able to publish their books.

"We also prepare funding to help publish the book," he said. (* / Zul)