Tali Kasih: A Form of Love from IPB University's Hanter for the Almamater 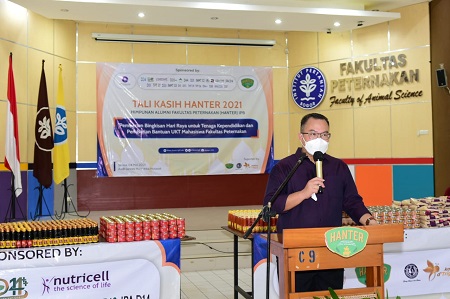 The Alumni Association of the Faculty of Animal Husbandry, IPB University (Hanter) once again provided holiday parcels and tuition assistance for the almamater, 4/5.  There are at least 250 parcels that will be distributed and tuition assistance of 37.5 million rupiahs.  This tuition fee will be given to students whose parents have been affected by the COVID-19 pandemic.

Ir Audy Joinaldy, General Chairperson of Hanter IPB University as well as Deputy Governor of West Sumatra said the holiday parcel packages were given to education personnel, both Civil Servants (PNS) and non-PNS, contract workers from laboratory personnel, seconded employees, security officers, and employees who both those who have died and are still alive.  "As a sign of Hanter IPB University's love for the alma mater, we want to give a token of love that is given regularly every year through Tali Kasih," said Audy.

Secretary-General of Hanter IPB University, Iyep Komala said, the tuition assistance was given to students whose families were affected by the COVID-19 pandemic of 2.5 million rupiahs/person.

He hopes that the next Tali Kasih activity can invite more alumni so that the value of gifts will also increase.  He also said that the love for the alma mater was also manifested by Hanter by helping families who face adversity.

"We want this activity to continue.  Many alumni have been successful in various fields of work.  I hope that the alumni, both on behalf of the company, personally, the coordinator of the force and the Provincial HANTER DPD, can contribute to this Love," said Iyep Komala. (RA) (IAAS/Adv)