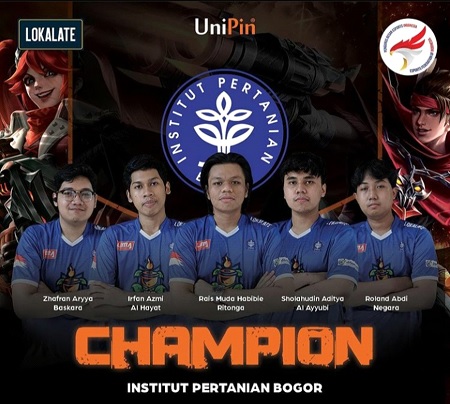 Joined in the heavy group, the Mobile Legend IPB University Team had to fight hard to qualify for the next round. This group contains several strong teams such as Ciputra University, UPN Veteran Jakarta, and the University of Indonesia. Joining a heavy group makes the players more motivated. Every match is played with excellent play.

The IPB University team managed to rank first in the group standings and were entitled to secure Upper Bracket tickets. "Surely we are very grateful to be able to qualify from this group, we are aware that there are still many shortcomings that we have to fix for the next match. In this championship we are targeting to win, "said the leader of the IPB University team, Sholadudin Aditya Al Ayubi.

"Alhamdulillah, we can win in this championship. An uneasy struggle from the group phase to the grand final. Of course, I am very proud to be able to make the IPB University campus proud at the national level. Thank you to everyone who has supported the IPB University team so far. This champion, is not the end of us because there are still many championship targets in the upcoming championships. Here we can prove that e-sports can also produce achievements. We hope that in the future we will continue to get support from various parties so that we can be more optimal in every championship that we will participate in, "he concluded. (IAAS/NAS)