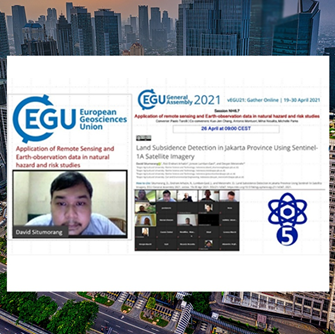 David Situmorang, SIK, IPB University academician from the Department of Marine Science and Technology, had been given the opportunity to present his research findings at the European Geosciences Union (EGU) General Assembly 2021 which was held online on April 19-30th, 2021. David’s research was titled “Land Subsidence Detection in Jakarta Province Using Sentinel-1A Satellite Imagery” and was conducted under the guidance of Risti Endrani Arhatin, SPi, MSi and Prof Jonson Lumban Gaol.

The EGU itself was established on September 2002 as a merger of the European Geophysical Society (EGS) and the European Union of Geosciences (EUG) which are headquartered in Munich, Germany.

In his presentation, David described the issues faced by Indonesia’s capital, Jakarta, in the last few years. One of those issues is land subsidence. David explained that the occurrence of land subsidence in Jakarta is the effect of the high utilization of the city’s groundwater. Land subsidence, in turn, causes damage to the road infrastructure in several areas within Jakarta. The cause of land subsidence could be categorized to natural and non-natural causes. Natural causes are factors which naturally cause land subsidence such as the movement of the Earth’s tectonic plates. While non-natural factors include human activities such as massive developments.