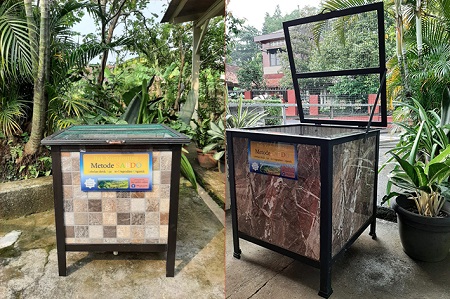 The professor of IPB University succeeded in developing an Odorless Composting Tub. Prof Arief Sabdo Yuwono, a lecturer at IPB University from the Department of Civil and Environmental Engineering, Faculty of Agricultural Technology, created the SABDO BakPo (SABDO Method Composting Tub) to accelerate the composting process of odorless organic waste.

The advantage of IPB University's innovation is that the biodegradation process takes place with a very low odor scale, namely -0.1. For information, the odor scale ranges in the range [-4 to +4]. Minus 4 means the smell is very uncomfortable or very unwelcome, while plus 4 means very pleasant, aka the smell that is very liked.

Prof Arief explained related to BSF larvae or pupae. According to him, BSF larvae in this composting tub can also be harvested and become a source of protein in making rations for poultry, fish or other livestock.

“BSF larvae contain 30-40 percent protein. So, BSF larvae are very potential as a source of feed protein, most of which are still imported, "he added.

In addition, BSF larvae that turn into BSF flies will not become vectors (carriers) of disease. This is because BSF flies are not among the house flies that land on various trash locations and then fly into the house.

BakPo SABDO is manufactured from its place of origin. So users don't have to bother looking for masons to make composting tubs in their respective homes.

If someone starts using BakPo SABDO, then the biodegradation process of organic waste can start on the same day. Alias, there is no need to wait for the arrival of BSF flies to lay eggs for up to a week or two weeks. This is because BakPo SABDO is applied at the same time with active BSF larvae in it.

The SABDO method has only been developed in the last two years. So that the wearer is still limited to families who have high concern in solid waste management. Areas that have been tested are Cilegon, Bogor, Yogyakarta, and Magetan.

"The number of BakPo SABDO that has been made is only around 30 units because it is still a new innovation. However, in 2021, a more massive and broad socialization will be carried out. "It is expected that there will be a significant increase in the number of users and it is estimated that up to one hundred units are spread across various cities and districts in Indonesia," he said.

This innovation is an example of an appropriate technology for IPB University that can be directly applied by the general public. The public can take advantage of this technology for free. However, there are other options as well. If you want to have BakPo SABDO without building your own, you can order the BakPo SABDO constructor.

In addition, the BakPo SABDO application can also be done through collaboration between IPB University and local governments.

"With this innovation, I hope that people should immediately sort their organic and inorganic waste in accordance with the mandate in Article 12 of Law Number 18 Year 2008. This article states that everyone is obliged to reduce and handle waste in an environmentally sound manner. In addition, it is also necessary to comply with Article 16 of Government Regulation (PP) Number 81 of 2012 where waste handling consists of sorting, collecting, transporting, processing and final processing. (dh/Zul) (IAAS/SYA)