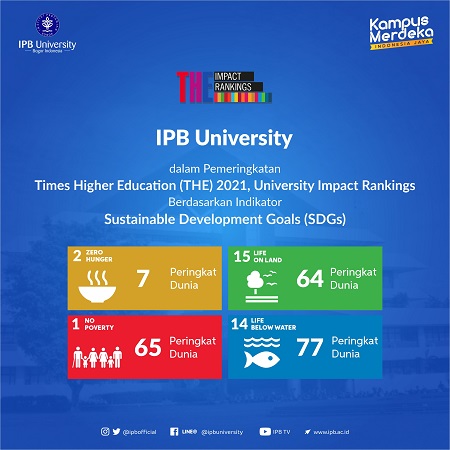 The 2021 THE Impact Rankings was announced on April 21st, 2021, from London, in the virtual forum titled “THE Innovation and Impact Summit: Cultivating Resilience, Changing the World”. This ranking included 1,115 of the world’s best universities which had performed its duties related to the 17 Sustainable Development Goals (SDGs). The ranking system refer to the university’s publications, consistencies and evidence which show the institution’s contributions to reach the SDGs.

i) 7th in the world for SDG#2: Zero Hunger, to end hunger, achieve food security and improved nutrition and promote sustainable agriculture,

ii) 64th in the world for SDG#15: Life on Land, to protect, restore and promote sustainable use of terrestrial ecosystems, sustainably manage forests, combat desertification, and halt and reverse land degradation and halt biodiversity loss,

iii) 77th in the world for SDG#14: Life below Water, to conserve and sustainably use the oceans, seas and marine resources for sustainable development,

iv) 65th in the world for SDG#1: No Poverty, to end poverty in all its forms everywhere.

Prof Arif Satria, Rector of IPB University, expressed his gratefulness for this achievement. This accomplishment has shown that even higher education institutions coming from developing countries are capable of showing their performance through this ranking methodology held by the credible world ranking institution. Prof Arif explained that the ranking system accommodates all aspects of a higher education institution’s tri dharma which are education, research and community service. Through these aspects, IPB University’s performance has been evaluated by several national and international institutions leading to its spot in Top 62 in the QS World University Ranking (WUR) by Subject on Agriculture and Forestry 2021. In the 2021 QS WUR, IPB University also placed 601-620 in Biological Science, 351-400 in Environmental Science (placing 1st in Indonesia), and 401-450 in Economics and Econometrics (placing 3rd in Indonesia).

The 64th Rank for SDG#15: Life on Land was made possible due to IPB University’s active efforts in creating appropriate technologies for efficient implementation in society, including social engineering. For example, the Walat Mountain Educational Forest which was made the model for small-scale sustainable forest located in Sukabumi. IPB University also actively holds global research collaborations in the field of tropical biodiversity which interacts with the environment and social economic aspects in several locations in Indonesia.

While for SDG#14: Life below Water, IPB University placed 77th in the world due to the university’s efforts in the field of marine and fisheries where IPB University holds an active partnership with the Indonesian Ministry of National Development Planning/National Development Planning Agency to consolidate programs and activities related to Life below Water on both national and international levels.

The fourth notable ranking relates to SDG#1 in which IPB University had ranked 65th in the world. Among the various activities held by the university, a special agenda to overcome poverty have been established and is in the process of constant evaluation. This agenda follows the university’s motto of “Inspiring Innovation with Integrity”. As a closing statement, the Rector of IPB University stated that the achievement IPB University has reached by ranking 101-200 in THE Impact Rankings serves as motivation to research for impacts (research for innovations in science and technology which is impactful towards society).