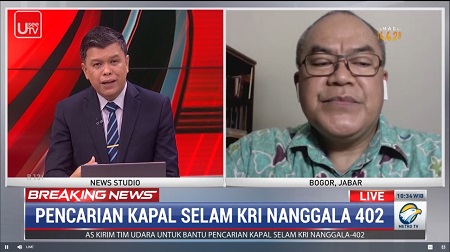 Dr Agus Saleh Atmadipoera, oceanology expert from IPB University described the condition of the Nanggala 402 submarine in the depths of the ocean. The submarine was declared missing on April 21st, 2021 around Bali Sea with 53 crew members aboard.

Dr Agus explained that the submarine might have drifted away due to the rotational current pattern around Bali Sea. Regarding the information that the submarine is in the depth of 700 m under sea level, he answered that there is a possibility that the vehicle had glided towards the ocean floor as the area is covered with underwater valleys. On the ocean floor, looking at the condition then, the sea currents were relatively calmer. While at 50-300 meters under sea level, there is a possibility that the submarine had been drifted away by the currents. This is possible even with the heavy weight of the submarine because of its buoyancy. While in the water surface currents are relatively calm. Dr Agus had spoken regarding this matter on the news program Breaking News Metro TV mid-April.

By mapping out the trajectory of the submarine if drifted by currents, according to the current patterns, most likely the submarine had been swept southwest towards the north of Bali, with the velocity of half a meter per second if in the condition of floating. Regarding the capability of the KRI Rigel ship, a hydro-oceanography auxiliary ship owned by the Indonesian Navy to detect the location of Nanggala 402 submarine, Dr Agus conveyed that the ship had the sonar detection capability which could detect the location of submarines in the depth of 600-700 meters under sea level. He explained that the auxiliary ship has advanced machineries and is qualified to locate the missing submarine. The trajectory of the submarine could be mapped out and make rescue efforts more efficient. The use of the Rigel ship would enable the navy to carry out rescue efforts immediately.