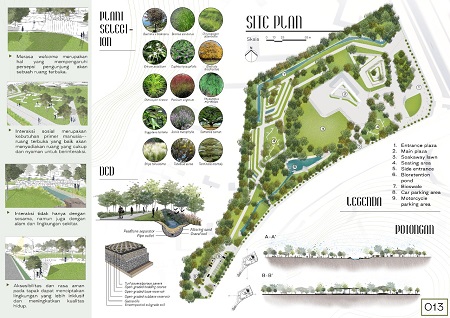 In the competition that was held late last year, Cindy and her team were inspired by the concept of a building that existed in ancient Greece. The building is named 'Agora', which is an open space in the city center near a government building which literally means 'gathering place'. It is said in history that the government built Agora to meet the socio-cultural and political needs of its people.

"Our preferred location is at a crossroads near the People's Consultative Assembly Building, the Ministry of Environment and Forestry Office, Palmerah Station, and Bentara Budaya Jakarta," said Cindy.

The Agora concept designed by Cindy and the team also received additional inspiration from the Jabodetabek electric train line. As its shape, which is in the form of parallel lines and branches with meeting nodes, shows that in addition to functioning as a meeting point, Agora also acts as a destination for people to enjoy natural beauty and interact with others.

The concept of Water-Sensitive Urban Design (WSUD) with the implementation of Sustainable Urban Drainage Systems (SUDS) is the main strength of Cindy's design and team. This concept is a water management technique that can improve groundwater quality and its availability. The concept is very fitting for the Jakarta City area with a relatively narrow area but high population density.

In addition, Sustainable Urban Drainage Systems (SUDS) are also a drainage system that can help reduce excess water conditions (flooding), especially in big cities like Jakarta, which are often flooded.

"Preparation for the competition is carried out for approximately two weeks with the guidance of a team of student affairs commission lecturers. The supervisor provides input on the design concept. In addition, the lecturer also guides us in strengthening the design principles that will be applied so that our design concepts are more mature, "she added.

One of the Student Affairs Commission lecturers, Rezky Khrisrachmansyah, SP, MT, said that the designs made by Cindy's team had quality graphic finishing. In addition, in terms of design techniques, it has the appropriate scale and good spatial logic. For Rezky Khrisrachmansyah in the process of accompanying students who are participating in competitions, two-way communication is needed.

"The willingness to listen to the ideas or aspirations of all team members and provide feedback according to proportions is also an important thing for the supervisor. In other words, lecturers need to be colleagues for their students, "said Rezky.

Tips from Rezky for students who are participating in a landscape design competition are the need to pay close attention to the TOR (Term of Reference) of the competition being participated in, the background of the jury, as well as the locality or context of the location to be planned. He also motivated all students in the competition, that it was not just victory that was pursued but the learning that was gained in the process. Such as teamwork, knowledge exchange between teams, and of course added value for portfolios. (IAAS /NAS )