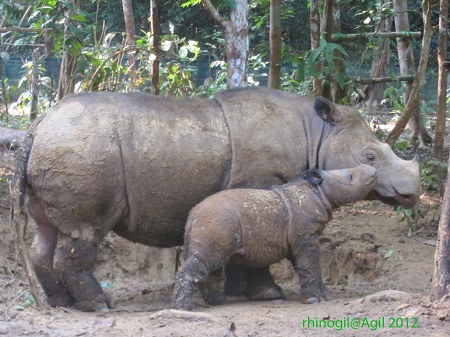 Dr drh Muhammad Agil, IPB University expert in rhinos, shares glints of hope for the survival of Sumatran Rhinos (Dicerorhinus sumatrensis) at the edge of extinction. According to Dr Agil, a technology exists which could potentially save rhinos from extinction if implemented immediately.

The Sumatran Rhino is the only species left on Earth from the genus Dicerorhinus and is known as the most primitive kind of hairy rhinos, found only in Indonesia. The species has been categorized as critically endangered by the International Union for Conservation of Nature (IUCN). Observers of rhinos have even considered the situation to be in a state of high crisis with little time left to save them.

In the last four decades, drastic declines of this iconic wildlife’s population have been observed. The decline has even been estimated to reach 90%. In 2015, this species of rhino was declared extinct in the Kerinci Seblat National Park. At almost the same time, its population in Malaysia has also disappeared. A total extinction in Malaysia, including Sabah, was officially announced two years ago.

Dr Agil mentioned that it is increasingly apparent that the Sumatran rhino population is moving closer towards extinction as it is becoming harder to find them in the Bukit Barisan Selatan (BSS) National Park. Currently, even if they had managed to survive, only 2-3 rhinos are estimated to be left in the BBS National Park. The same situation is found in Way Kambas National Park where an estimate of only 15 Sumatran rhinos are left. The intention of rescuing this species is faced with increasing challenges along with the passing of time.

Dr drh Muhammad Agil who is also a lecturer of IPB University’s Faculty of Veterinary Medicine, Division of Reproduction and the Head of the faculty’s Hormone Analysis Laboratory, mentioned that quick and targeted actions are necessary to save the Sumatran rhinos from extinction. Based on research and data collection throughout 2000 to 2017, he has discovered that most rhinos successfully captured from the wild with the purpose of conserving the species face difficulties in reproducing. Nearly 70% of Sumatran rhinos saved from isolation, termed “doomed rhino”, face abnormalities and pathological conditions, and therefore are hindered from achieving pregnancy.  Those rhinos suffer from abnormalities in their reproductive organs and tract such as tumors and cysts. “Doomed rhino” is the term given to rhinos with low chances of meeting a mate. Even in normal conditions, pregnancy is difficult in most Sumatran rhinos due to undeveloped embryos and early embryonic death such as the case found in Emi, a rhino in the USA before she died, and Ratu, a rhino in the Sumatran Rhino Sanctuary of Way Kambas.

To save the genetic resources of Sumatran rhinos, quick implementation of Assisted Reproduction Technology (ART) and Bio-Bank is necessary. ART and Bio-Bank are reproduction technologies which can be used to turn available genetic resources into Sumatran rhino embryos. With the use of these technologies, several means of rescue could be considered and developed, including in vitro fertilization (IVF), intracystoplasmic sperm injection (ICSI), or cloning techniques with induced pluripotent stem cell (IPSC) technique from somatic cells (fibroblasts). Technologies such as test-tube embryos in endangered wildlife are advanced and have managed to save the northern white rhino which was declared extinct in the wild. In Indonesia, embryo transfer has reached a success rate of 40% in cows. This could be used as a model to develop renewable technologies with more in-depth research.

In rhinos with reproductive organ and tract abnormalities, these assisted reproduction technology methods could be utilized optimally by harvesting their genetic resource from both female and male rhinos and producing an embryo which could then be stored and transferred to a surrogate mother in the future as “back-up” if other conservation methods have failed.

Embryos produced from ART could either transferred to a healthy individual rhino or stored long-term in the Bio-Bank. To ensure the success of this program, a strong partnership between multiple parties including the managing authority (Directorate of Natural and ecosystem Conservation under the Indonesian Ministry of Environment and Forestry), research institutions such as IPB University, the authorized scientific institution, Indonesian Institute of Sciences (LIPI), and conservation institutions such as the Sumatran Rhino Sanctuary, Taman Safari Indonesia (TSI), and other ex-situ conservation sites with relevant competencies. IPB University shows full support in ART programs and Bio-Bank for Sumatran rhinos and endangered wildlife in Indonesia through the development of the Centre for Assisted Reproductive Technology (ART) and Bio-bank of the Sumatran rhino and Critically Endangered Wildlife in Indonesia.

Protection of Sumatran rhinos in the wild must be made more intensive and effective. A variety of technology which exists to obtain real time data on illegal activities such as poaching should be properly used to increase effectivity of rhino protection. The focus should be on securing the safety of rhinos in habitats such as in Leuser which serve as the last hope for the species to survive in the wild. However, the decline in data of Sumatran rhino population and distribution shows that mere protection is not enough to save the Sumatran rhinos.

An emergency action plan to save the Sumatran rhinos have been released by the Indonesian Director General of Natural Resources and Ecosystem Conservation and is currently in implementation. It is of high importance for this plan to be immediately strengthened by the utilization of ART and increased protection of rhinos in the wild.