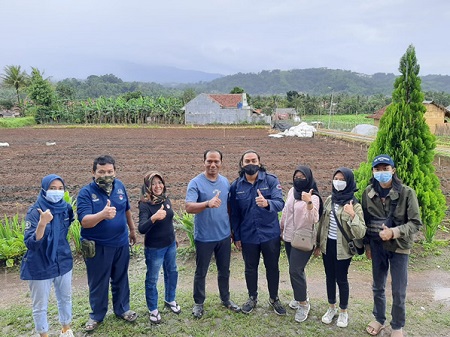 Succcess in developing Sukadamai village, Himakua IPB University has further motivated  to expand the dedication for other villages. They also conducted a survey in the villages around campus to find villages with potential to be develop.

Himakua will target four villages in providing guidance. The initial survey was conducted in Sinar Sari and Purwasari Villages, (9/1).

According to the Head of Himakua, Muhammad Roikhan, Sinar Sari Village is a village that has  potential for cultivating tilapia and goldfish cultivated in "Setu" which are usually used for fishing. The harvest from the fish is used for the common benefit of Sinar Sari Village, such as being used for healthy walking activities and events on August 17. In addition to consumption fish, Sinar Sari Village also cultivates ornamental fish which began in 2010. The ornamental fish that are cultivated are Corydoras Fish and Black Ghost Fish. Corydoras fish farming  itself has been going on for a long time.

Initially, the community in Sinar Sari Village used an aquarium, but using of aquarium was deemed ineffective, so currently using a tarp pool. The sale of Corydoras fish is in the form of seeds. The sale is generally once every three days. Sinar Sari villagers also cultivate Black Ghost fish, but it is still in trial and development. In cultivating Black Ghost fish, it is still constrained by the small size of the fish and many have died due to disease.

"Sinar Sari Village has actually tried to cultivate Neon Tetra fish, but the results were not optimal, so it was not continued," he said.

The cultivation of ornamental fish itself has'nt lasted long and still really needs a market for fish sales. Purwasari Village has enormous potential, but it needs guidance to further develop the existing potential.

"Both Sinar Sari and Purwasari villages expect guidance in the processing and manufactur of feed both pellet and natural feed because so far the cost of buying feed is quite high," he explained. (** / Zul)