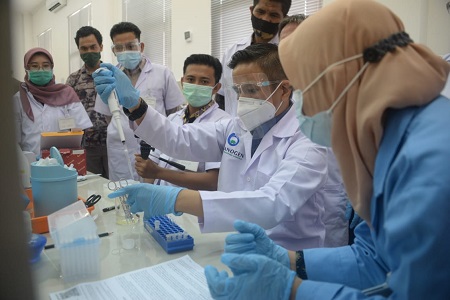 DNA Barcoding is a method of molecular biology to identify an organism based on nucleotide base sequences. This method has been widely used by researchers in the world to facilitate the identification of species of organisms that exist in the water. Barcoding DNA is based on the use of tissues from a living being to extract its DNA which is then processed molecularly and bioinformatics until it can be known its species and its origin to its ancestors.

Head of The Laboratory of Marine Biodiversity and Biosistematics (Biodivsi), Dr Hawis Madduppa said, West Kalimantan has a very important position as a biodiversity center both from land and sea products. However, said Dr Hawis, there are still many types of fish that have not been recorded in West Kalimantan.

"There are actually many unique biota that have not been recorded. And that's what we have to work on. Our collaboration with DNA training and genetic data analysis can create experts for DNA and genetic analysis. I hope the existing laboratory becomes a reference.  And we from IPB University are ready to support," said IPB University Lecturer and Researcher of Biodiversity and Molecular Biology Marine Studies.

On the same occasion, WWF Indonesia representative Dwi Suprapti said that basic training on DNA Barcoding and Genetic Data Analysis of aquatic animals is important. According to him, in addition to species identification and mapping, this training is also expected to develop laboratories, especially in West Kalimantan with dna barcoding and Genetic Data Analysis capabilities.

"So far, many parties have difficulty testing samples because they have to be sent out of the area. In fact, there are not a few cases of marine mammals, turtles, sharks and other aquatic species that are stranded and unidentified types. In addition, there are few cases of smuggling animals that are not recognized by species (whether they are protected animals or not)," she said.

On the other hand, the availability of molucular laboratories can help law enforcement and protected species authorities to know the origin of animals handled or confiscated. So it is important to have DNA mapping and data collection of species, especially aquatic species.

Separately, Head of The Center for Coastal and Marine Resources Management (BPSPL) Pontianak Getreda M Hehanussa welcomed the collaborative efforts in the basic training activities of DNA Barcoding and Genetic Data Analysis. According to him, so far BPSPL Pontianak has carried out several activities related to its role as implementer of fish species and genetics conservation as well as traffic control of protected fish species trade. However, this effort is still not optimal because of the difficulty of identifying species.

"This difficulty often occurs in the process of identifying types of marine biota found in incomplete conditions, either due to decay, dismemberment, or already a fishery derivative product that is difficult to visually identify," he said.

According to him, the ability to identify species through dna barcoding methods and DNA analysis is important in efforts to solve these problems. DNA testing and analysis requires the support of competent Human Resources (HR) as well as facilities and infrastructure in the form of standardized laboratories. "We are very supportive of this training activity. We hope that through this activity there will be a transfer of knowledge and understanding so that it can produce competent human resources in DNA testing and analysis, especially in the West Kalimantan region," he hoped.

The same thing was also expressed by the Head of Fish Quarantine Station, Quality Control and Safety of Pontianak Miharjo Fishery Products. According to him, the waters of West Kalimantan are rich in fishery resources. However, until now there is no data on the type and number of fish in West Kalimantan.

In fact, said Miharjo, the economic value generated from international trade transactions reaches hundreds of billions of rupiah. In May 2019 alone, it reached 144.8 billion with a total of 254,700 head for live fish commodities and 262.5 tons of fresh, wet and frozen fishery products exported to a number of countries. The fishery products are passed through Pontianak Port and Pontianak Supadio Airport. One of them is Arowana Super Red which every day there are shipments outside West Kalimantan.

According to Miharjo, in addition to monitoring the traffic of fish trade, it also monitors the invasive or invasive fish species of alien species. It is a foreign species whose existence and spread causes or potentially causes harm to the economic environment, or human health. Therefore, it welcomes the basic training of DNA and Genetic Data Analysis of aquatic animals. "Barcoding's DNA is very important. Do not let massive exploitation, but the ecosystem is disturbed," he hoped.

Meanwhile, Assistant Director IV of Pontianak State Polytechnic Dr Widodo said that the existence of the Bio-Molecular Laboratory of the Center for Excellence in Fishery Resources Technology of Pontianak State Polytechnic (Polnep) is expected to be a pilot development project of all majors. "Through this training is expected to be the forerunner of technological development in the future, especially marine science and fisheries," said. (IAAS/NAS)