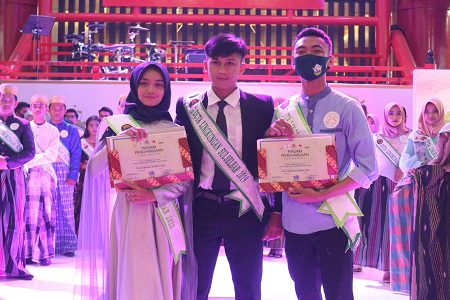 Akram Mubarak, IPB University students from Faculty of Fisheries and Marine Sciences (FPIK) managed to make achievements in the selection of Environmental Ambassadors for South and West Sulawesi (Sulselbar) 2020. Akram, his nickname has succeeded in becoming The Best Intelligence and Top 10 Environmental Ambassadors for Sulselbar 2020 after competing closely with 35 other finalists.

Akram's participation in this event was not made by an accident, otherwise Akram Mubarak feels called to be dedicated to the environment and is concerned about the worsening environment. "So I decided to take part in the election for the South Sulawesi Environmental Ambassador." He said. (11/10).

Akram managed to outperform 35 finalists who were previously selected from 80 participants. "This activity was attended by more than 80 people from various regions in South and West Sulawesi. However, there were 35 finalists who passed to fight in the provincial arena." explained by the student of Leadership Dormitory and Agricultural Struggle Cadre.

Akram's success in this event is not easy, he said he must go through various stages. Starting from file selection, registration, technical meetings, pre-tests, interviews, talents, visits to the governor's office, hearings to the environmental service, and the last stage in the grand final.

"In this activity I received digitalization-based environmental education and utilized plastic as an asset, no longer considered a burden on life." He said.

After this activity, Akram wil concern on The Environmental Dedication Center that will focus on the coastal areas and the agricultural sector. This is in accordance with his background as a fisheries student from the nation's best agricultural campus. "In the coastal sector there is Coastal Education (Duper) as a form of community empowerment participation in coastal areas." He said.

He hopes that in the future, he can move and participate actively with the government, community and society to create a more beautiful and cleaner environment. Hopefully millennials will be more aware of environmental concerns, because caring starts with simple things. Like not littering, sorting trash, then throwing it according to its place, using a tumbler to use a tote bag as a substitute for plastic.

"The most important thing is that millennials are able to implement zero waste living or a lifestyle to reduce waste use." He said. The selection of Environmental Ambassadors was held by Sahabat Pemuda Prestasi Indonesia Foundation (YASPPI) by implementing health protocol. (IAAS/NRF)