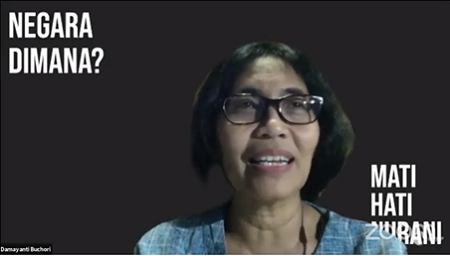 The Student Executive Board of the Student Family (BEM KM) of IPB University collaborates with the People's Coalition for Food Sovereignty (KRKP) to hold an online discussion through the Goes to Campus Food Obrolin event with the theme "Managing the Way of Indonesia's Food System", 7/10. This event aims to invite academics together with the community to discuss the issue of an ideal and sovereign national food system without causing harm to any party. The hope is that a bright spot will be found to improve the national food system that is currently running during this pandemic, especially with the passage of the Job Creation Bill which invites pros and cons from various parties.

Present as one of the main speakers, Prof. Dr. Damayanti Buchori, Professor of IPB University from the Faculty of Agriculture. Prof. Damayanti explained her thoughts about the food system based on an agroecological perspective which not only emphasizes the green agriculture aspect but also as a social movement. She said that the problem of the upstream food system today is when the uncertainty of natural processes is trying to be controlled by the human system. In the form of industrial mechanisms, such as the use of environmentally friendly technology or uncontrolled changes in spatial planning, to policies that do not favor small and insignificant farmers. According to Prof. Damayanti, agricultural intensification will cause disasters such as soil erosion or the effect of greenhouse gases.

The role of institutional elements in the food system also plays a big role. According to her, one of the key factors is institutions at the farmer level such as farmer groups or cooperatives. Through social movements in the form of collective action, access to knowledge, land, capital, and negotiating power for farmers' interests will be easily achieved. Of course there is a right strategy and ideology needed in it. "How to build that ideology? Yes, through group meetings. That will be an important strength, "said the lecturer of IPB University from the Department of Plant Protection.

She also criticized the implementation of spatial policies and policies that ignore science and empowerment programs that do not empower. The program will instead make farmers dependent on external sources.

According to her, the traditional agricultural system is an ideal food system that upholds the principle of sustainability. For example, through the fallow system and respect for nature. She also mentioned the need to develop an agroecological system that produces crop health by strengthening below ground and above ground diversity and developing ecological engineering. "To carry out agroecology, a paradigm shift is needed. The paradigm is how we see the landscape context, ” she said.

In the series of events, Dr. Bayu Krisnamurti, IPB University lecturer from the Department of Agribusiness, Faculty of Economics and Management (FEM) also commented. According to him, the portion of society in the food system is bigger than the government itself. So that depending on the government is not something that is considered very important. What needs to be considered is the non-commodity way of thinking and approach. "Again, that's why I really support the food system because it can no longer be just a single commodity, it can't be just one aspect, we have to include everything," he said.

In addition, metadata shows that there is still an imbalance in the discussion of food systems which is solely about productivity. So that other discussions such as food waste or consumers are left aside. He also hopes that there will be consumer association and development of a sustainable food system so that a sovereign national food system can be achieved. (IAAS/NAS)