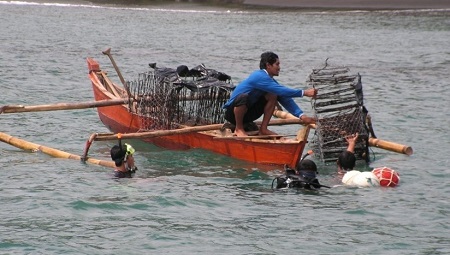 As an archipelago country, Indonesia has abundant marine resources, including squid. Therefore, the concept of catching fish and squid is directed to a concept that is sustainable and based on certain species stocks.

This development should be managed rationally to ensure the effort in the business is commensurate with the production capacity of existing resources. This is intended to protect the population, quality of production and aquatic ecosystems, as well as to prohibit fishing activities that use explosives, poisons and fishing practices that can cause environmental damage.

For that, IPB University Lecturers from the Department of Fisheries Resources Utilization, Faculty of Fisheries and Marine Sciences, Prof. Dr. Mulyono S Baskoro and Dr. Roza Yusfiandayani developed a squid attractor which is used to enrich squid resources in a water area. This attractor, said Mulyono, can be used as a place for the squid to release its eggs, then the eggs stick to the attractor until they hatch.

"The existence of the atraktor makes an area as a place to gather and lay squid eggs. This makes a potential area with squid resources, in addition to that the area has a unique underwater landscape with its squid egg expanse, and can serve as a foster area," continued Prof Mulyono.

Dr Roza explained that the harmonica wire squid attractor is made with a construction resembling a four-petal flower with a diameter of 120-130 centimeters and a height of 35-40 centimeters. This attractor is equipped with a strand of hemp rope on each petal and is covered at the top with a dark plastic sheet. The strands of hemp ropes attached to the inside of the attractor's petals serve as a place for the squid to attach its eggs, while the black plastic sheet at the top of the attractor is intended to reduce the intensity of sunlight coming on the part where the squid will release its eggs, and at the same time as protector. Installation of attractors in waters with a depth of 5-7 meters and is carried out with a long circuit system. A series of attractors can consist of five or ten attractors with a distance of about 5 meters between them.

Meanwhile, the bamboo squid attractor is made with an open box-shaped construction with four bamboo poles at each corner. The bamboo attractor has a length of 60 centimeters, a width of 60 centimeters and a height of 40 centimeters. The bamboo attractor is equipped with a strand of coconut fiber in the middle and is covered at the top with a sheet of gunny sack. The strands of coconut fibers attached to the center of the bamboo attractor serve as a place for the squid to attach its eggs. The gunny sack sheet on the top of the attractor is intended to reduce the intensity of sunlight coming on the squid to release its eggs, as well as protection. Installation of attractors in water can be carried out at a depth of 3-7 meters and is carried out with a long circuit system. A series can consist of five or ten attractors with a distance between the attractors of about 5 meters.

The asphalt or oil used drum attractor is made with the construction following the shape of the drum, which is in the form of a tube with both open ends. This attractor is also equipped with a strand of hemp rope in the middle, without a cover sheet because the drum wall gives a quite dark atmosphere in the attractor. Installation of attractors in water can be carried out at a depth of 3-7 meters and is carried out with a long circuit system. A series can consist of five or ten attractors with a distance between the attractors of about 5 meters.

"The squid attractor is developed by utilizing the behavior of the squid itself, namely when the squid spawns, attaching its eggs to the substrate in a dimly lit environment. In this condition the attractor is very effective as a spawning ground and in a certain time the squid population will increase significantly, "added Prof. Mulyono.

Not only that, the squid attractor can become a rearing and growing area, which in turn can develop into a potential fishing area. With the existence of a squid attractor in a sea, it can be an attractive area to be developed as a coastal ecotourism area, with diving and fishing activities. This innovation is also an effort to transfer technology easily to the community in the context of empowering coastal communities, improving the skills of coastal communities in developing alternative livelihoods, namely squid cultivation.

The squid attractor has been developed since 2006 in Teluk Pelabuhan Ratu, West Java. The observations showed that a harmonica wire squid attractor can be attached about 600 to 1000 squid eggs in 120-200 egg capsules. Meanwhile, one squid attractor from used drums installed in the waters of Bangka Belitung can contain 234 egg capsules, each of which contains four to five individual prospective squid. To date, squid attractors have been installed in 14 provinces, 30 districts in Indonesia. From 2006 to 2020, training activities were conducted for fishermen on the innovation of this squid attractor. Many fishermen feel the benefits of this innovation, including increasing profits.

One of the fishermen in Cirebon said that the innovation of the squid attractor is easy to manufacture, cheap in terms of manufacturing materials and can be directly practiced by fishermen, "said Rustono, head of the fishermen group in the Cirebon area. (IAAS / NAS)