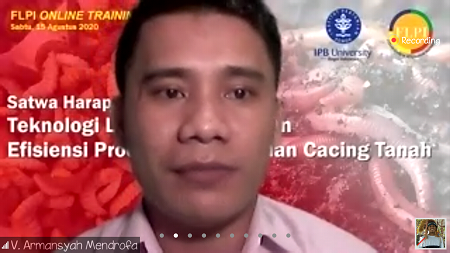 For some people, earthworms are identical to disgusting animals. However, the fact is that not a few people cultivate earthworms for their livelihood. Even though it is disgusting, but it has economic value and can use as raw material for medical drugs.

For this reason, a lecturer from IPB University from the Faculty of Animal Husbandry, Verika Armansyah Mendrofa, SPt, MSi, explained the cultivation of earthworms as animal feed and food. According to her, it has a protein content of 64-76 percent. The price of earthworms is quite fantastic, one kilogram of earthworms is 40 thousand to 120 thousand in  Bogor area. Not only can the worms be sold, but worm products such as liquid fertilizer vermicompost too.

"Liquid fertilizers and vermicompost are very beneficial for soil and plant fertility. This is a promising business opportunity, " said Verika in an online training organized by the Faculty of Animal Husbandry IPB University collaboration with the Indonesian Animal Husbandry Logistics Forum (FLPI) recently.

She continued, the benefits of earthworms are animal feed, human food, medicines, cosmetics, waste processing, industrial waste processing, plant fertilizers, and agricultural land fertilizer. Meanwhile, vermicompost had an N content of 1.40 percent, P of 4.33 percent, and K of 1.20 percent. This content is higher than cow, horse, goat, and pig manure.

From the medical side, earthworms contain the enzyme lumbrokinase which is useful for lowering blood pressure, ischemic disease, and stroke. It also contains peroxidase and catalase enzymes, which function to treat degenerative diseases such as diabetes mellitus, cholesterol, and rheumatism. Not only that, but it also contains ligase and cellulase enzymes to facilitate digestion and arachidonic enzymes as antipyretic drugs.

Unfortunately, many benefits of earthworms are not yet fully utilized in Indonesia. People in Indonesia generally only use it as animal feed or as soil and plant fertilizers.

For earthworms to have high quality and selling value, Verika explained about good cultivation techniques. Before doing cultivation, she suggested that the cultivation location is in a shady and humid place. That intended to prevent the earthworms from overheating and not being submerged excessively.

"Even though worms live in the soil, actually worms don't like it when it gets a lot of water, especially when the soil flooded with water. This water can seal the holes in the worm's path so that the worms are uncomfortable with the water. If possible, the place of cultivation does not absorb water, ” she explained.

For feed or live media, she explained, it can come from household waste, restaurants, agriculture, livestock, and other organic materials. It recommended that worms' live media should not be made from sharp, spiny, hairy, sour, spicy, oily, or dangerous chemicals. And then before being given, the media chopped first and slightly moistened but not wet.

Earthworm seeds can be obtained by looking in the garden or piles of garbage or livestock manure or buying from worm breeders. Worm seeds should be obtained from several places and various sizes.

During cultivation, it is advisable to carry out treatment by stirring the media every two weeks so that media aeration is maintained. If the media has turned black, the media can be broken down and added with new media.

Earthworm harvesting activities can carry out when the media is ripe. The sign of ripe media is a dark brown color, loose texture like soil, the shape is different from the initial media and generally, the pH is around 7. For harvesting media or vermicompost, it recommended that the media is clean from worms and cocoons. The media is then dried, if necessary filtered it. (IAAS/ASH)