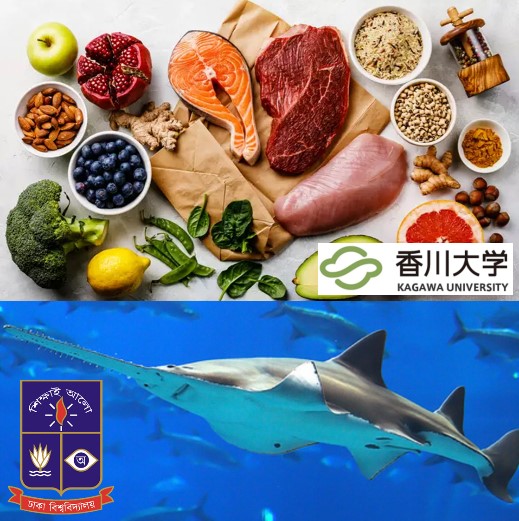 IPB University’s Department of Animal Husbandry Production and Technology (IPTP) has held a webinar series for the second time. In this webinar, an international speaker was invited: Prof Dr Masahiro Ogawa from Kagawa University, Japan (16/6). The theme this time was “Armoring Yourself with the Molecules Helping You to Win over the Virus” which discusses the potential of animal protein sources in Indonesia. Prof Masahiro Ogawa is an expert in protein, and many of his researches discusses sugar and natural additives. According to his research, public health in Indonesia is at a critical level due to the pandemic. The culture change from eating out to eating at home forces some people to consume packaged or instant food with low nutrients, unpalatable taste and high calories which the public would still buy despite the cons. Added to that is the low exercise lifestyle led by people which can increase their risk of acquiring diseases. Compared to Indonesia, some of the packaged food and drink products in Japan are added with nutrients and natural additives to reduce the poor effects on consumers’ health. Prof Masahiro expressed his expectation for a future where food is much healthier and tastier, but still need added ingredients to enhance its benefits. For example in chicken sausage production, the high use of salt, sugar, phosphate, and sodium nitrate are replaced with natural and healthier additives. Sugar is replaced with rare sugar d-allulose even if the cost is relatively high and it’s rarely found in nature. This material has health benefits such as antihyperglycemic properties, suppression of fat accumulation, anti-obesity, and is suitable for frozen food products such as sausages since it can repair texture and prevent syneresis. Another kind of natural ingredient is polyphenol antioxidant from the extract of olives used for the repair of texture and prevention of lipid oxidation in sausages. Besides rare sugar, Dr Zakiah Wulandari, IPB University lecturer from IPTP Department has conducted a research on lysozyme in egg whites which can be used as a sweetener. The research result on local poultry eggs like the kampong chicken and Cihateup duck eggs shows that isolation and purification of lysozyme in the egg creates a sweetener which can be used for sugar replacement. The worryingly high number of sugar imports and diabetic patients are the background of the mentioned research. She was able to achieve a purification percentage of 97% and a level of sweetness of around 10µM. However, the heating process during production can reduce the sweetness level of the product. She recommends the addition of high dosage lysozyme for the product sterilization to overcome this problem. Discussing a different matter, Dr Cahyo Budiman, lecturer of IPTP in IPB University, puts his focus of discussion on the antiviral properties and potential of animal source protein. Most of his research refers to the antiviral properties of processed dairy products and fermentation products. Lactoferrin in milk can prevent attachment and translation of the virus using various mechanisms. Some researches show that this substance has the potential to hinder the herpes virus, HIV, and hepatitis C. In light of the latest pandemic, its potential leads to its application on SARS-Cov2. He added that the substance can be used as an additive on several products such as powder milk. However, much work is still needed to be able to translate and pass the properties to the clinical or application level. Similar with the discussion on antiviral properties, Prof Dr Irma Isnafia Arief, lecturer of IPB University’s Animal Product Technology Division, discussed about the antibacterial properties of bacteriocin. A kind of protein originates from lactate acid bacteria on functional animal food products. This protein is observed to have a safe and non-toxic preservative potential. This an amphiphilic helix structure, this substance can easily enter the pathogen bacteria’s cell membrane and cause depolarization which leads to death (bactericidal). Prof Irma has done several researches on bacteriocin, specifically the plantaricin IIA-1 A variety produced in the form of crystal, ensuring it travel friendly. It has also been registered in the HKI. This substance is suitable to be added to fermented products in situ in animal products such as ‘sausage urutan’ (Bali), ‘rangke’ (South Sulawesi), and ‘dadih’ (West Sumatera). In fresh meat, it is applied using a spray which contains 0.2% of plantaricin to elongate its perseverance in the market. While for meatballs and sausages, a higher dosage of 0.3% is applied. This substance is observed to be three times more effective than nitrite.

A different kind of webinar was held in the topic of sawfish conservation. According to Sihar Silalahi, alumnus IPB Department of Marine Science and Technology and Head of Sawfish Project Indonesia, conservation efforts of sawfishes in Indonesia is non-existent. Conservation in Indonesia has never specifically focused on sawfish before. Other countries such as Bangladesh, Australia, America, and Africa have shown much of their concerns to the current conservation status of sawfish. To create dialog and share experiences between Indonesia and Bangladesh regarding efforts of sawfish conservation, Sihar and the team at Sawfish Project Indonesia held an online discussion with Mahatub Khan Badhon, a sawfish researcher in Bangladesh (17/6). Badhon is currently a lecturer in the University of Dhaka, Bangladesh. In this opportunity, Badhon shared his research experiences with James Cook University. He explained that sawfish is not the main catch of fishermen in Bangladesh. The market price of sawfish is no higher than the usual main catches such as pomfret or ilish. The sawfish in Bangladesh are unintentionally caught in the fishermen’s nets, technically called by-catch. When this happens, fishermen are unaware of the appropriate way to release sawfishes. According to Badhon, the solution to this problem is to increase awareness of the local fishermen. Badhon himself had used several media to achieve this, such as guidebooks and Youtube videos which explain the correct way to release caught sawfishes. Education of local fishermen is very important in maritime-based conservation. Fishermen are people who will hopefully continue the work of conservation for endangered species in the coast area. Without educated fishermen, there will not be a sustainable conservation. The Sawfish Project Indonesia team hopes that the message of this Bangladeshi researcher can be realized into an activity program which aims to enlighten the lives of local fishermen in Merauke in relation to the nearly extinct ray. Willy, a member of SPI who now works as an environment consultant, described the work of SPI. He explains that currently, SPI is preparing teaching materials and models which will be used in the education program. The plan is that they will draft a guidebook and short video on the appropriate way to release sawfish which will be released in two languages, Indonesian language, and Papuan language. Sihar and his team will keep preparing the necessities of sawfish conservation in Merauke. This group of students and alumni of IPB University is collaborating with a student of Brawijaya University. Last May, they were announced to be winners of the Conservation Leadership Programme Award 2020. Through this award, they will hold the first conservation program of sawfish in Indonesia.